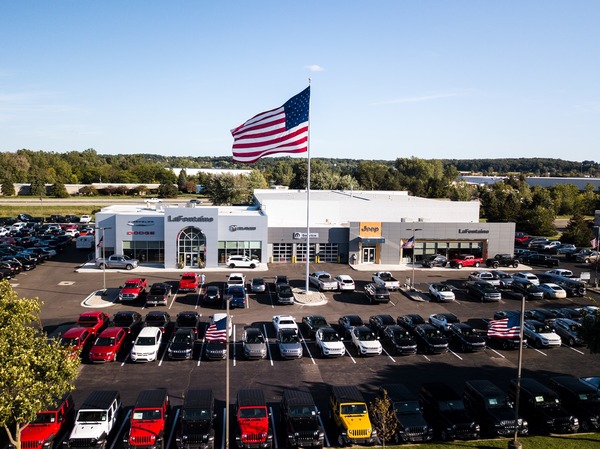 
A request by a Fenton automobile dealership to fly 55 American flags over their lot has been denied.

The City Planning Commission met Thursday night with Shaun Bernard, the general manager of the Fenton LaFontaine Chrysler Dodge Ram dealership. Bernard had recently bought a flag for every light pole, as has been displayed in the past, but was told about a month ago from the City that he was in violation of the ordinance and had to take them down.

In Fenton, flags are defined as signs. Each business can have up to 3 flag poles with 3 flags on them, but they need to be on a flag pole. A flag on a light post, as would be the case at the dealership, would become a pole sign. Pole signs are prohibited in the City. A letter from City Planner Carmine Avantini also explained that allowing this would go against City design standards and potentially open up the possibility of a flag on every light post. Additionally, under the Special Land use section for auto dealerships, flags banners and streamers shall not be permitted unless allowed by the planning commission.

Commissioners got into a debate about the American flag being different from a sign or advertisement and instead being a symbol of patriotism. Avantini explained that recent Supreme Court decisions don’t allow them to judge the content of signs, and all need to be considered basically blank canvases.

Scott Grossmeyer pointed out that while it might not be a traditional sign, it is an attention grabber. He said, “And you’ve gotta remember, this is not the first time. That business was told before to remove the flags. And in both instances, the flags, probably mostly because they’re tie-wrapped to the top of a light pole instead of on a proper flag pole where they can be lowered easily and replaced, those 55 flags flew in tatters, which is terribly disrespectful.” Bernard is relatively new to the position in Fenton, and Grossmeyer said that while he has no doubt of Bernard’s intentions, there is history there.

David Stickel kept his opinion based on City regulations, saying, “This isn’t about the flag or patriotism…seems like placing flags on light poles violates several ordinances and design guidelines.” He said approval would probably open them up for many exceptions they probably do not want to have and that “3 flag poles provides plenty of opportunity to display patriotism in a very strong way.”