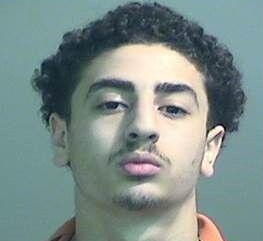 
A Fenton Township teen has been sentenced to prison for fatally shooting his best friend.

19-year-old Abdurrahman Ahmed Akl had been charged with second degree murder in the 2017 shooting death of 18-year-old Brady Morris. His trial in Genesee County Circuit Court had been adjourned more than half a dozen times but in mid-August, he entered a guilty plea to an amended charge of manslaughter and to a felony firearm count.

On the manslaughter charge, Akl was ordered to first serve a minimum of 4 years and 9 months and a maximum of 15 years in prison with credit for 550 days served. He must consecutively serve a 2-year sentence for the felony firearm charge and will receive credit for 730 days. Akl was also ordered to pay restitution in the amount of $1,974. He’s spent nearly three and a half years in custody and had faced up to life in prison on the original counts.

Police arrested Akl on March 4th, 2017 after responding to a 9-1-1 report of a male with a gunshot to the head. Authorities say evidence indicates that Akl and Morris, who were friends, were alone on the first floor of the residence when the shooting occurred. An autopsy indicated Morris was shot from behind at point blank range. During a 911 call of the incident, Akl can be heard screaming, telling the dispatcher he pointed a gun at his friend and killed him. He admitted in court to smoking marijuana that night and said he and Morris were playing with the gun when it went off. He admitted that he had failed to check the gun to see if it was loaded before pulling the trigger.