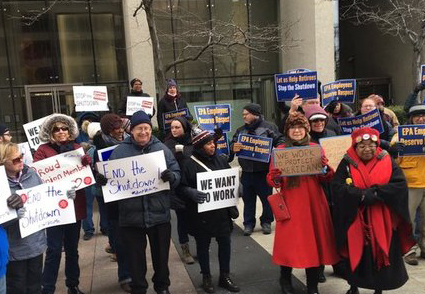 Federal employees, including some from Livingston County, fed up with the government shutdown are planning to brave the cold and rally in front of the Federal Building in Detroit on Friday.

About 2,000 Michiganders work for federal agencies, and a little more than half are working without pay, while the rest are locked out of their jobs until the shutdown is resolved. Mark Coryell, president of the union that represents local employees of the Environmental Protection Agency in Ann Arbor, says the families are really starting to feel the pinch.

"These are people who aren't getting paychecks that have mortgages and car payments, child support and child care,” he points out. “I know people are starting to make arrangements with mortgage lenders, reaching out to their landlords. So it's starting to hit people seriously."

Federal employees in Michigan deemed essential, and working without pay, include those who work at the Transportation Safety Administration and the Federal Bureau of Prisons. The rally starts at noon. Coryell says the EPA office in Michigan regulates the quality of gasoline and scrutinizes tailpipe emissions on cars before they're produced. So a delay in their work will eventually delay production and sale of new models, and hurt those jobs.

"The automotive industry's plans will be affected by it,” Coryell points out. “And if those plans are affected by it, their plans for how they're going to use their labor force will be impacted as well."

The partial government shutdown is now on its 27th day – the longest in U.S. history. President Donald Trump has refused to sign any funding bill that does not contain money for a border wall with Mexico, while Congressional Democrats refuse to provide money for a wall they say Trump insisted would be paid for by Mexico. (JK)