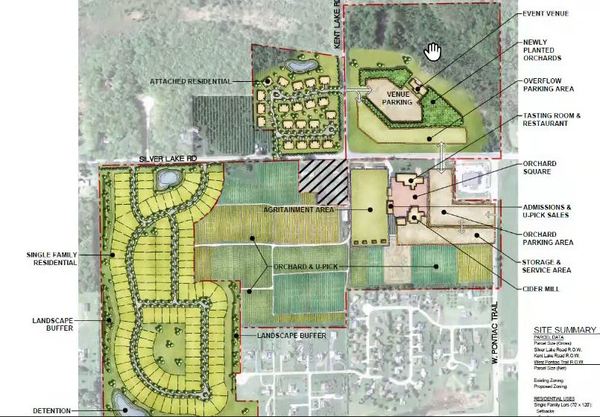 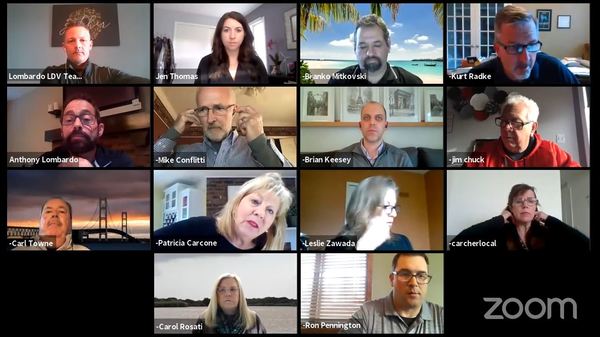 
The latest proposed development at the Erwin Orchards site in Lyon Township would save the cider mill and most of the orchard.

Developer Lombardo Homes was before the Lyon Township Planning Commission, Monday night, for a conceptual plan review. Proposed was the planned development, Orchard Crossing, to be located at the corners of Pontiac Trail, Silver Lake Road, and Kent Lake Road.

Orchard Crossing would feature 121 single-family homes and 20 duplex buildings for a population density of .89 units per acre, which is below the allowed 1.25 units per acre. A previously rejected development at the site proposed closer to 400 homes. They also pledged a minimum of $150,000 to help with traffic improvements on that often busy stretch of road. There would be an event center, a tasting room, space for agri-tourism businesses, and perhaps most importantly, preservation of the cider mill and orchard.

Planning Commissioner Jim Chuck said he loves the plan and how the density is under that of the parallel plan, it saves the orchard, and will create jobs. He said it looked like a win for the township, a win for the Erwin’s, and a win for the developers and residents.

Most planning commissioners were in agreement that there weren’t many negatives to this plan, though it is still in the earliest phase. The developer stated they were working with another family with orchard experience to take over Erwin’s and turn it into a sustainable year-round business. There were questions about the event venue, but those uses are still to be determined.

Commissioner Carl Towne was the sole critic saying he wanted more information before he would be ready to jump on board. He expressed thoughts that much of the non-residential space looked more commercial in nature.

The applicant will now bring the concept plan before the township board for their thoughts, before potentially moving into the next phase, which includes a preliminary review.