Engler Set To Be Replaced As MSU President 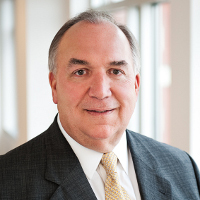 John Engler is expected to resign as interim president of Michigan State University.

Multiple sources said the decision came hours after the board set a special meeting for early Thursday morning and intended to fire him. Board member Joel Ferguson told The Associated Press that board members expect to receive a letter Wednesday providing details of Engler's resignation, including its effective date. He added: "Yes, John is going to resign." Engler has resisted previous calls to step down. He took over on an interim basis in February after the previous president resigned amid fallout from the Nassar scandal.

Earlier today, the chairwoman of Michigan State University's Board of Trustees said the embattled interim school president "has a decision to make" in the wake of his latest comments about victims of serial sexual abuser Larry Nassar. Dianne Byrum told The Associated Press she had a "frank" conversation with Engler today. She stopped short of confirming that she asked him to resign, but said the board is poised to appoint a new interim president at a Thursday meeting. She said she had not yet heard back from Engler.

Engler told The Detroit News last week that women sexually assaulted by the now-imprisoned Nassar have been in the "spotlight" and are "still enjoying that moment at times, you know, the awards and recognition." Byrum said Engler continues to "open wounds for survivors" and hamper the university's efforts to regain trust and credibility.

Engler has faced heavy criticism since taking over for former President Lou Anna Simon, who resigned amid criticism for her handling of the Larry Nassar sexual assaults scandal.(AP/JM)