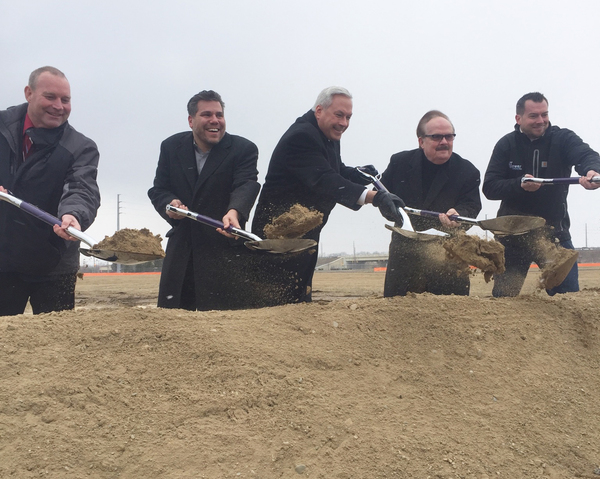 Construction will soon be underway for a new theater in Hartland Township, following a groundbreaking ceremony Friday.

The ceremony was held at the site of the soon-to-come Emagine movie theater, which will be located in the Hartland Towne Square Plaza at the northeast corner of M-59 and US-23. Community members, local officials and project leaders attended the kick-off, as well as representatives from Emagine Entertainment and developer Ramco-Gershonson.

Emagine Entertainment CEO Paul Glantz says he’s looking forward to serving the area and theater’s guests, adding that breaking ground feels “spectacular”. Glantz says he couldn’t be happier to be bringing a state-of-the-art theater to the area and becoming a part of the community, noting the township has been very welcoming.

Discussion surrounding project plans began over a year and a half ago in the summer of 2016. Larry Fox, Chairperson of the township’s Planning Commission, says a lot of hard work and planning has gone into the much-anticipated theater. Township Supervisor Bill Fountain says, "We are just tickled to death to have them join the community". Fountain says the business is in line with the township's “friendly by nature” slogan and wished project leaders well.

The theater will feature 1,140 seats in ten state-of-the-art auditoriums and an EMAX screen. The theater will include various amenities including upscale décor, reclining chairs, special front row seating of cuddle chairs, a full-service bar and expanded concession menu. The official grand opening of Emagine Hartland is tentatively slated for December of 2018. (DK)