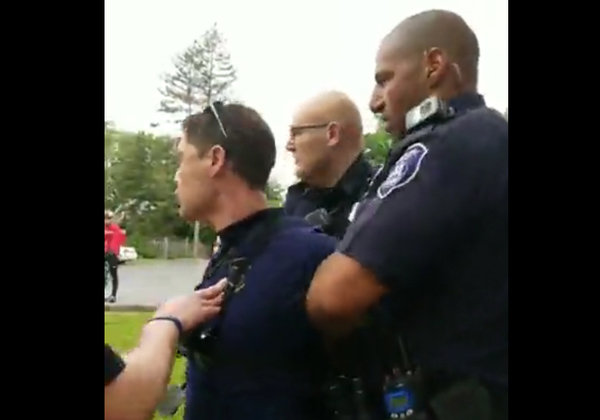 A candidate for the 8th Congressional District was arrested Saturday by Royal Oak Police after they say he refused to stay out of the roadway during a running event.

Brian Ellison, who is running as a Libertarian in the 8th District, was taken into custody at the Royal Oak Police Department's Run with the Police event as he protested two recent fatal shootings by Royal Oak police. Royal Oak Police Chief Corrigan O'Donohue told the Detroit Free Press that Ellison was told to stay out of the roadway, but refused. Ellison was charged with two misdemeanors accusing him of interfering with a government operation and resisting arrest. He was released on bond and will be arraigned at a later date. Ellison could not be immediately reached for comment Sunday.

A video of the incident was posted on a Facebook page for Brian Ellison. In the video, Ellison is seen being arrested after going into the street. As they handcuffed him, he repeatedly says: "Get your hands off me." O'Donohue said it was Ellison’s intent to disrupt the event. Ellison gained media attention earlier this year when he proposed arming homeless people with guns.

The 8th District covers Ingham and Livingston counties and northern Oakland County, but does not include Royal Oak. (JK)