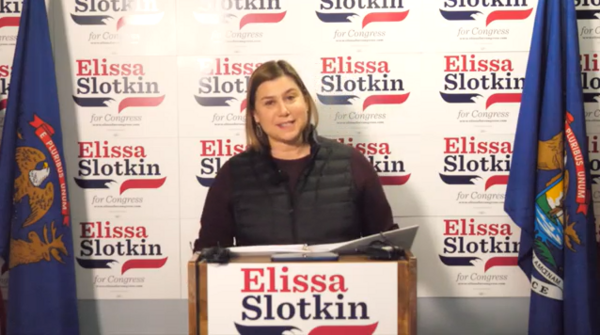 The Associated Press called the race around 3am for Slotkin, who stated that Barrett called her to concede not long after.

The race in the newly drawn 7th District had long been dubbed a tossup and was among the key races for Republicans in their bid to regain control of the House. Both Slotkin and Barrett did extensive campaigning locally, which included knocking on doors in neighborhoods.

In a victory speech Wednesday, Slotkin noted it was the most expensive House race in the country and one of the top ten most competitive and it took a lot of hard work and support. Slotkin cited substance and style as being key to her win in the Republican-leaning region.

Slotkin commented that “you cannot sleepwalk to victory in this district” and have to be willing to work hard – adding it's about making yourself available to meet people in rural communities and getting invested in local issues. Slotkin said people are tired of dirty politics and it doesn't work in this District where neighbors, coworkers, and family members have very different political views. She stressed that people want to see their elected leaders working together to make lives better for their constituents - not see each other as enemies.

A press release, attached, states that a resounding theme of the election results was Slotkin’s overperformance in Republican-leaning townships and rural areas.

Barrett issued the following statement after the election:

“Thank you from the bottom of our hearts to everyone who had a role in our campaign. Each of you helped make a difference. I am so proud of my team and the campaign we ran. I launched my campaign one year ago, and I knew it would be a hard race, but one worth running. I still feel that way today. Whether you contributed financially, with your time and talents, your vote, or the prayers you lifted for us, just know that Ashley and I appreciate you so much. I called my opponent early this morning to congratulate her. This was the most expensive congressional race in the nation, and it sure felt like it. While I didn’t win this election, I still feel like a winner. I won more time with my family, and I am so thankful for the opportunities I have had over the last eight years in public office. Today Ashley and I took some time together with our kids, something I am looking forward to doing more of”.