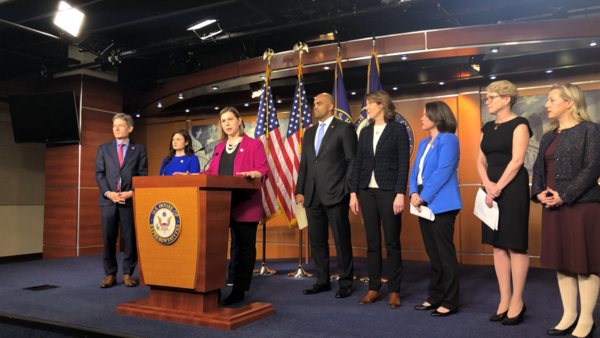 Livingston County’s congressional representative has joined with other House freshmen lawmakers to introduce the Shutdown to End All Shutdowns or (SEAS) Act, emphasizing the need to end the practice of using shutdowns as a negotiation tactic.

Holly Democrat Elissa Slotkin led a group of more than 20 freshmen lawmakers in introducing the legislation during a press conference yesterday to protect federal workers, disincentivize future government shutdowns and demand an end to partisan gridlock. In addition to shifting the hardship caused by a federal government shutdown to those responsible for it, the SEAS Act would allow government to continue operating under an automatic continuing resolution for as long as Congress and the President fail to agree on an appropriations measure. Specifically, the SEAS Act would prohibit the use of federal funds for member travel and require daily quorum calls for the duration of a federal government shutdown. The legislation would also suspend member pay and not hold it in escrow, as it is under current law. The SEAS Act would also impose equally stiff penalties for the president, prohibiting the use of federal funds for Executive Branch and Cabinet, except by waiver in cases of national security, natural disaster or national emergency. Under the new law, the use of federal funds would also be prohibited for Executive Branch bonuses, receptions, entertainment, exercise facilities and golf courses during a shutdown.

Slotkin says they think they have the right bill at the right time, with the right combination of people and the right will to get something done. When asked if there was any indication the bill would make it to the floor, Slotkin responded that House Speaker Nancy Pelosi is aware of what they’ve been doing. She says they have heard some positive signals about leadership being willing to consider legislation in concept that would generally prevent future shutdowns and thinks there is real momentum. Slotkin noted the group backing the bill found themselves as freshman lawmakers during a government shutdown they inherited so they took advantage of looking at things they could try and affect. Slotkin added she doesn’t think anyone is under any illusions the bill would play into the February 15th deadline imposed by President Donald Trump but she hopes, given momentum, it would be soon after. Slotkin says if Congress and the President can’t agree on spending, the burden shouldn’t fall on federal workers and their families -- it should fall on leaders in Washington. As a former federal worker for 14 years, Slotkin said she’s proud to be introducing a bill that ensures federal workers aren’t held hostage by stalled negotiations and it puts real skin in the game for members of Congress and the President if they can’t do their jobs.

During the press conference, a question was put forth about different bills being put forward on both the House and Senate side. Slotkin said if they have different versions of the same bill that ends shutdowns, that is a solvable problem and they’ve had very positive signals. When asked if the new bill would be passed before President Donald Trump’s February 15th deadline threatening another shutdown, Slotkin spoke for the group in saying they felt it was always intended to be prospective and looking forward. A link to the press conference is provided. (JM)