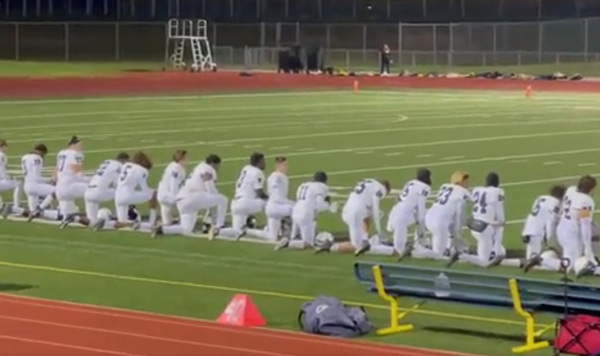 
UPDATE: This story has been updated to add comments from the Michigan High School Athletic Association.


While South Lyon High School’s football team is celebrating a regional championship following Friday’s win over Portage Central, the fallout from an incident the week before continues to reverberate.

On Friday, November 5th during the Division 2 district final between South Lyon and East Lansing, a spectator sitting in the South Lyon fan section yelled out an obscenity at the visiting East Lansing football team while they took a knee during the national anthem, something the Trojans have been doing since last season. The moment was caught on a cell phone video, a link of which was provided to WHMI by the South Lyon district.

Since that revelation came to light, there have also been accusations that players for South Lyon leveled racial slurs at East Lansing players, including the use of the N-word. The issue of the fan yelling the obscenity was confirmed by the district, which stated that the spectator was not a district student nor affiliated with South Lyon Schools.

As to the allegation of racial epithets, that has been strongly denied by South Lyon officials, including in a school-wide announcement made Friday at South Lyon High School, a recording of which was provided to WHMI. In the recording, a school official, identified as the Assistant Principal, is heard over the intercom saying;

“The East Lansing game officials and coaches have been questioned and no such concerns were brought to their attention during or after the game. At no point have concerns about sportsmanship about our student-athletes been raised by the East Lansing Athletic Director…We certainly don’t believe those actions are representative of our fans or our athletes.”

However, that stands in contrast to several to the statements of several white East Lansing players, who said they heard the N-word directed at their Black teammates, while they were called “[N-word] lovers” and “race traitors.” One of them, Ethan DeWitt, told East Lansing Info that the comments “bring awareness to the situation,” adding “that’s why we kneel.”

Meanwhile, Geoff Kimmerly, the Michigan High School Athletic Association's (MHSSA) Communications Director told WHMI that "The MHSAA’s role in a situation like this one is to get the schools involved talking with each other so they can work together toward a resolution. We were made aware of this by a parent, and when we contacted the schools we found out they already had been in discussion, sharing their findings and other details."