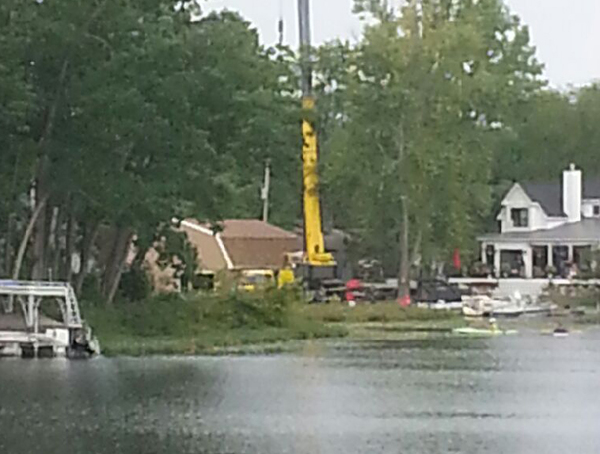 A controversial drawbridge that was installed on Lobdell Lake in Argentine Township without permits is coming down.

Owner Brett DeGayner installed a drawbridge on July 8th from his residence to Turtle Island but did not obtain the necessary permits to do so. Work was taking place to remove the bridge yesterday, the latest deadline apparently worked out with the state. The drawbridge is approximately 10 feet wide and the span connects Whitehead Drive to Turtle Island. DeGayner owns property on Turtle Island that he rents out, as well as the connecting property on Whitehead Drive. Some neighbors have voiced multiple safety concerns and Argentine Township officials reportedly delivered a stop work order to DeGayner but he had it installed anyway. The Water Resource Division’s Enforcement Unit of the Michigan Department of Environment, Great Lakes and Energy or ELGE sent a letter to DeGayner ordering him to remove the bridge by July 28th but that never happened. DeGayner is being required to remove the bridge to do so in a manner that minimizes any additional impacts to the waterway such as siltation, pollution and bottomland or wetland disturbance. He must also dispose of all removed materials to a non-regulated upland area and contact the state Office immediately upon completion of the restoration requirements so an inspection can be conducted. The Tri-County Times reports that DeGayner’s attorney notified the state that the drawbridge would be removed Tuesday and work appeared to be taking place.

Supervisor Brian Saad and Treasurer Norm Schmidt have not responded to requests for comment from WHMI. Messages have also been left with the state seeking an update on the situation. Facebook photo of Tuesday work. (JM)