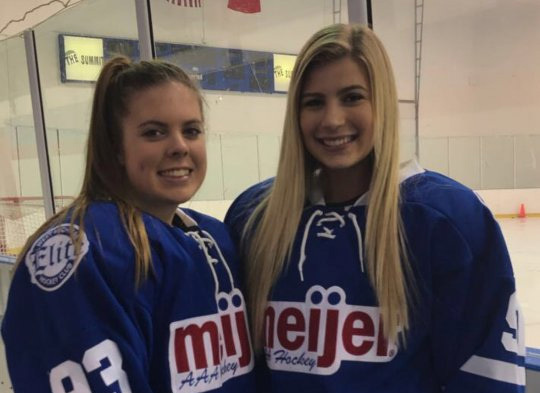 The Brighton Area Schools Board of Education has accepted the gift of $3,000 from Latitude Digital of Livonia for the Livingston United Girls’ Co-op hockey team.

The fledgling sport is now in its second year. The team, coached by Doug Fowler, is composed of female athletes from Brighton, Howell and Hartland high schools. The team practices at the Grand Oaks Ice Arena in Genoa Township. Brighton Superintendent Greg Gray tells WHMI the team was formed to expand opportunities for female athletes interested in contact sports but who, up until now, have had limited opportunities.

A big reason for the formation of the team was the tragic deaths of Darian Locklear (right), a Brighton High School student, and Julianna Ward Brown (left), who was a student at Howell High School, in February of last year when the vehicle they were riding in hit two trees on I-96 near Williamston in Ingham County. The girls, both 16, were on their way to hockey practice in Lansing for the Meijer AAA Division Girls’ Hockey Team when the crash happened. Coach Fowler, along with Darian’s mom, Regina Locklear, pushed for establishment of the girls’ hockey team in the aftermath of the tragedy so that girls interested in playing ice hockey wouldn’t have to travel so far for practices and games.

However, there weren’t enough girls interested in playing the sport from each school, so the co-op, consisting of players from all three schools, was formed. It is a club sport, and as such does not receive direct financial support from the school’s athletic department and relies instead on donations, such as that provided by Latitude Digital. (TT)