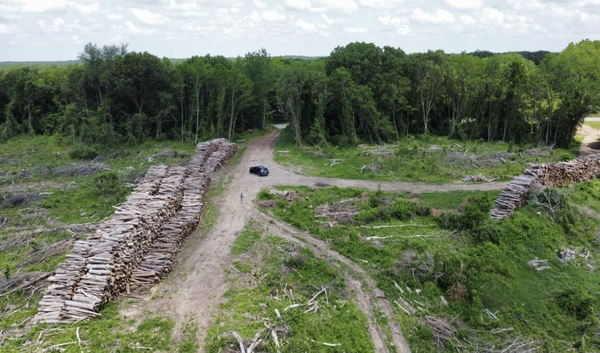 
Plans to reclaim two parcels of land in Genoa Township for use as a tree seed orchard will be the subject of a Michigan Department of Natural Resources public meeting this week.

The 50-acre and 77-acre parcels are located in the vicinity of Brighton Road and Cunningham Lake Road near the DNR’s Tree Improvement Center. Both were listed as surplus and destined for auction.

According to the DNR, the steps to complete before the land can be used for a seed orchard include completing a timber sale that is in progress, contouring the land through a mineral lease, and then planting and maintaining trees on the property.

It is the mineral lease portion that has created consternation among nearby residents. MDNR Silviculturist Jason Hartman says the land needs to be leveled out before it can be used as a seed orchard and the mineral lease is one way to achieve that. "The main question is 'Where is the middle ground?' In order to make the project practical to do, you have to give the company enough time to do it, but we also want to balance that against the impacts on the community. Exactly where that lands right now, we're unsure."

However, for residents like Tom Horgan, the idea that a gravel mine will be placed right in their neighborhood for an indeterminate number of years is not something they can accept. "The big concern is the impact on the overall environment. We moved to Genoa Township, we moved to the Brighton area, we like the quiet area, we like a vibrant downtown. We know it evolves, but it doesn't have to evolve negatively."

Horgan is just one area resident who has formed a group called Stop the Gravel Pit to oppose the plan. They have held several meetings, with one last week focused on how best they can present their concerns when the DNR holds a public information meeting tomorrow, Tuesday, October 12th at Brighton High School from 6 to 8pm.