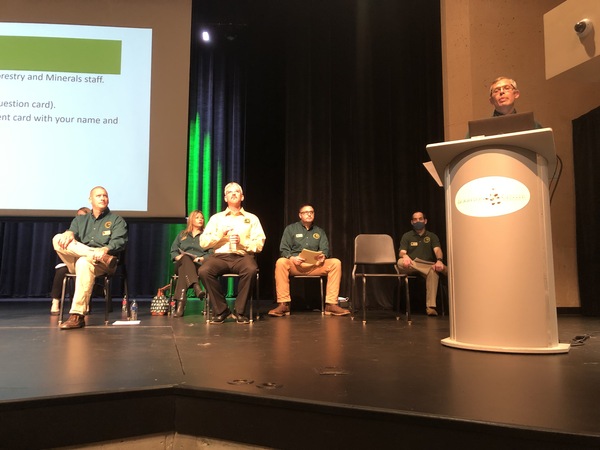 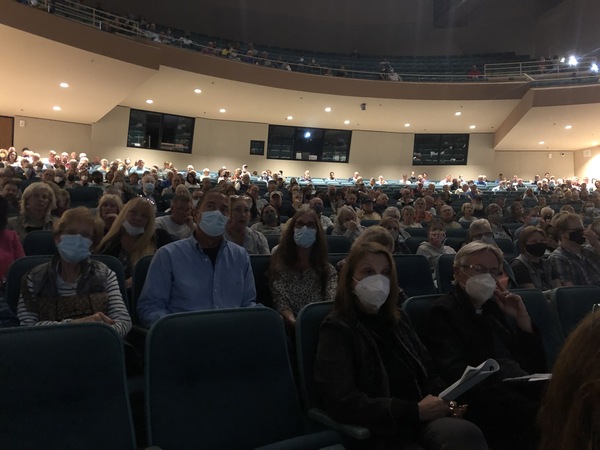 
The Michigan Department of Natural Resources held an informational meeting with residents about a potential gravel mine and seed orchard in Genoa Township.

The state owns two properties totaling a combined 127-acres between Brighton Road and Cunningham Lake Road. The DNR has long-term plans to turn the properties into a seed orchard and green space for residents. However, to get to that point, they wish to lease it for gravel extraction that will flatten the land.

DNR Silviculturist Jason Hartman said there are two reasons this project is important. He said that it will help support the reforestation program in the state, and give the property a shot at some kind of natural resource value.

More than five hundred Genoa Township residents attended a meeting hosted by the DNR at the Brighton Center for the Performing Arts, at Brighton High School, last night. Following a presentation that was shaded, in the beginning, towards the seed orchard aspect, many residents in the audience expressed feelings of the presenters not being forthcoming with the bigger issue in their minds: the gravel pit.

One resident who lives near the sites, Theresa, expressed this, accusing the representatives, stating, “You don’t want to listen to us. You set this up for us to listen to you about a public park and streams and being able to walk your dog. This is 50 years from now, probably. It’s just a shame.”

Residents were also critical of a timber cutting operation authorized by the DNR that has been ongoing this year, pointing to their perceived devastation of the land and destruction of existing greenspace. One homeowner, Ryan, said the area looks like a bomb was dropped on it, calling it “total devastation.” He went on to express health concerns from a gravel operation, asking, “Could we be exposed to health issues like silicosis, COPD, kidney, and lung diseases?” He said the children, the seniors, and the whole community deserve better.

Several other residents spoke about the dangers of silica dust being kicked up in the air and an existing contamination plume moving into the water supply. A couple of hunters lamented losing that space while others worried about negative effects on property values, damage to the roads, and a general loss of their quality of life.

During their presentation, the DNR reported that they had 4-million acres of state land, which led residents to ask why they needed the 127 in Genoa Township.

DNR reps said that if the project should fall apart, they would likely let it go to auction, and then a developer could come in and build houses. The audience applauded that, preferring that option to any time with a gravel mine. When asked how long the mining process would take, DNR reps estimated between 3 and 9 years but noted that it had to be done in stages. Several residents were skeptical about that timeframe.

Despite that, Hartman said he understands there is fear and that a lot of this is unsettling for folks, but that agencies like EGLE, the township, and the road commission would be there to deal with these issues. He said he is going to reach out to local groups that want to present information to the DNR, and that he is happy to listen and hear them out. In terms of the leasing timeline, he told WHMI there will be discussion, he thinks, about whether the DNR wants to talk about this some more and/or stay on their current timeline.

The DNR is accepting public comments on the project by email. Send comments to DNR-BrightonSeedOrchard@Michigan.gov

One local group has set up a website protesting the project. Visit it at www.stopthegravelpit.com.