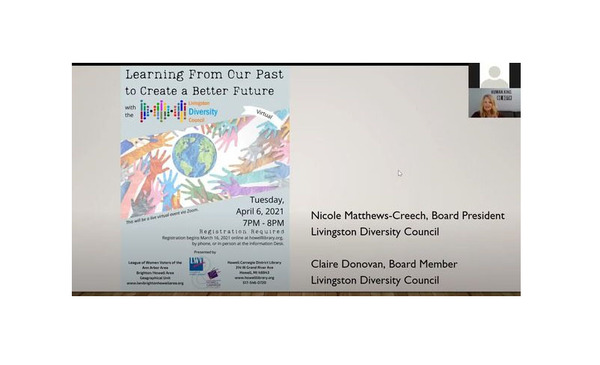 
Livingston County’s social reputation was the focus of a recent event by multiple agencies wishing to change it for the better.

Last week, the Livingston Diversity Council, in partnership with the Livingston County chapter of the League of Women Voters and the Howell Carnegie District Library hosted the online program “Learning From Our Past to Create a Better Future.” Diversity Council Board President Nicole Matthews-Creech led the event, challenging the narrative that racism exists everywhere and that’s just the way it is. She said that while it is not exclusive to our community, Livingston County does have a unique and critical connection to it.

The program delved into the county’s ties to former KKK Grand Dragon Robert Miles and how before his 1992 death, he encouraged followers to “go underground and breed like crazy.” While the Southern Poverty Law Center claims that no Klan activity exists in Livingston County today, there is still evidence of racism through unwritten rules and the unspoken fears by people of color coming to the county. Matthews-Creech said Howell and Brighton are still known as “sundown towns…” To that, she said, “The concept is that is not safe for a person of color to be seen in the community after sundown. At that point they will be seen as having ill intent in being here and it’s not safe for them to be here. I would argue that even during the day people are concerned due to the history and reputation.”

The event also touched on current topics in the community such as anti-Asian-American sentiments and the devaluing of members of the LGBGTQIA+ communities.

In an effort to help, she laid out the Livingston Diversity Council’s outreach plan for 2021, encouraging people to get involved. With a major awareness and fundraising event planned, the LDC also hopes to hold 3 to 6 smaller awareness events, hold 12 monthly virtual learning opportunities, and implement diversity, equity, and inclusion plans with local school districts.

Matthews-Creek said her charge to residents is to start brave conversations, don’t be afraid to "open your mouth and be ready to apologize when you misstep because you will."