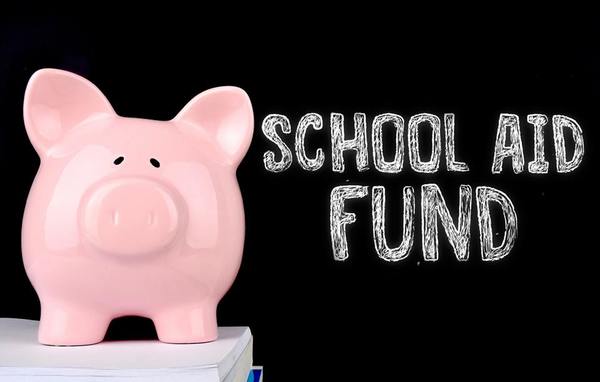 
Funding to K-12 school districts in Michigan - including those in Livingston County - could take a major hit this year due to the economic fallout stemming from the virulent COVID-19 pandemic.

The loss of tax revenue from businesses and the sluggish, stay-at-home-directed economy in general is forcing the state legislature to look at hundreds of dollars in per-pupil funding cuts to public school districts across Michigan, with a $1 to 3 billion loss in the combined general fund and state school aid fund. The Michigan Dept. of Education, in a recent memo to school superintendents, school boards and other affected parties, said that “revenues combined in the General Fund/School Aid Fund could be below budgeted estimates by $1-3 billion this fiscal year and between $1-4 billion next fiscal year.” The memo (which was co-authored by State Superintendent Michael F. Rice, Chris Wigent of the Michigan Association of Superintendents & Administrators; Don Wotruba of the Michigan Association of School Boards and David Martell of the Michigan School Business Officials) said, “Short of an enormous additional federal appropriation from Congress, school districts will likely have to make deep cuts to their budgets for the next fiscal year.” The cut being prominently mentioned in Lansing these days is $650 — meaning a $650 cut for every K-12 public school student in the state, although the figure could go even higher.

In Brighton, Livingston County’s largest school district with a full-time-equated enrollment of 8,307 when its Shared Services students are included, the Board of Education is looking at a potential loss of $5.4 million. That would reduce Brighton’s fund balance to $2.6 million in just one year. With a second year of equal or greater state budget cuts being discussed as a possibility, Brighton would be back in a deficit situation, which it took years to erase — without drastically cutting expenditures. Brighton Superintendent Greg Gray says, “The finance committee already has a general idea (of the range of potential cuts) and will do multiple budgets” for the coming year, and will settle on the one that fits the amount of revenue that will be coming in.

Howell is in the best position of any K-12 public school district in the county, with a healthy fund balance of $12.4 million, as of the end of the 2018-19 fiscal year last June. With an enrollment of 6,956, Howell’s revenue loss at $650 per student would be $4.5 million. Even without any cuts, Howell's fund balance would still be a robust $7.9 million.

However, in the Pinckney Community Schools, the picture is far darker. The district is already in deficit, the red ink totaling $712,000 at the end of the 2018-19 fiscal year. With a potential $650 or greater per-student reduction in state aid looming over the horizon, the district is looking at a revenue loss of $1.6 million for 2020-21. Absent any budget cuts, Pinckney’s deficit could mushroom to $2.3 million or more. And what’s worse, the state is contemplating a second year of equal or greater budget cuts estimated at $1-4 billion, saying the COVID-19 pandemic will have long-term effects on Michigan’s economy. All else being equal, a $1 billion decline in School Aid Fund revenue translates to a cut of roughly $685 per student. The MDE adds that a cut in the current fiscal year (FY 2019-20) is still possible, even though the year is just two months from ending.

Pinckney Schools Superintendent Rick Todd says his district is dealing with the funding crisis by “looking to create multiple budget models that will take into consideration cuts of $250 per student, $450 per student and even a potential $1,000-per-student cut,” as a potential worst-case scenario. Todd says his district was already poised to make significant cuts in staffing for the fall term to help address the deficit, but now, “will need to begin considering even deeper cuts.” His hope is that the state legislature “can use this opportunity to realize that Proposal A is not structured to provide the financial support schools need to continue providing the essential service of education, especially in a recession.” Todd says the state needs to “be looking at how best to support our students, teachers and communities in a new and evolving world.”

In Fowlerville and Hartland, the situation isn’t nearly so dire as it is in Pinckney. Fowlerville had a fund equity of $2.95 million at the end of the 2018-19 fiscal year, and the $1.8 million loss in revenue would give the district a new fund balance of about $1.2 million, without any budget cuts. In Hartland, the 18-19 fund balance was $6.5 million, and with a revenue loss of $3.6 million, the subsequent fund balance would be just under $3 million, without any budget cuts to mitigate the state aid reduction.

State Senator Lana Theis (R) of Brighton Twp. says it’s hard to say at this time how deep state education budget cuts will go. Theis, who chairs the Senate Education Committee, says more will be known after the May 15th consensus revenue estimating conference in Lansing. Such regularly-held conferences serve the purpose of predicting the economic outlook for Michigan and the US for the next three years, coupled with revenue and other estimates. Regardless of what happens at the conference, she says, the impact of COVID-19 on the state’s economy — with the resultant closures of “non-essential” businesses and stay-at-home directives — will be keenly felt by Michigan’s public school districts, which rely on state per-pupil aid for the majority of their budgets. And the majority of that revenue comes from the state sales tax and income tax - both of which have been hit hard by the coronavirus pandemic. “That’s why we’re trying to get the businesses back to work as soon as possible,” Theis says, adding the sooner that happens, the less the damage will be to the state’s economy. Gov. Gretchen Whitmer has said she is using a controlled, data-driven approach to reopening the economy as a resurgence of the virus would be catastrophic and could trigger a worst case scenario in which a second shutdown would be required to prevent the health care system from being overloaded.

William DiSessa, a spokesman for the Michigan Department of Education, tells WHMI that it is important to note that the organizations that represent local school superintendents, local school boards, and local school business officials across the state all were involved in making local education officials aware of the impending financial issues for school districts, “and that short of an enormous additional federal appropriation from Congress, school districts will likely have to make deep cuts to their budgets for the next fiscal year (FY2020-21).“