Dexter Woman Remembered For Her Love Of Fishing 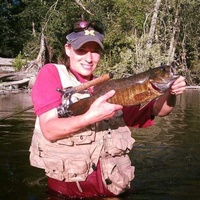 A memorial service is set for a Dexter woman whose body was recovered from the Huron River after she went kayaking.

Washtenaw County Sheriff's Office spokesman Derrick Jackson has confirmed that the body of 36-year-old Robin Early was found Friday evening in the river about 1.5 miles from where she disappeared. Early, who has a Dexter address, was last seen putting a kayak in the water near the Portage Lake Dam Thursday afternoon. A GoFundMe Page has been created to assist the family with funeral expenses and future educational needs for her two children. Early loved to fish and according to the page, she was fishing for smallmouth bass on “her beloved Huron River” at the time of her death. You’ll find that link below. A memorial service for Early is also set for this Saturday, June 9th at 11am at the Peoples Church in Pinckney.

Her death is the second one on the river last week. On Thursday night, a person spotted what looked to be a body near the Argo Dam in Ann Arbor. The sheriff's office said the body was that of 35-year-old Jason Yoder. He'd been missing since jumping from a railroad bridge Wednesday. (JK)