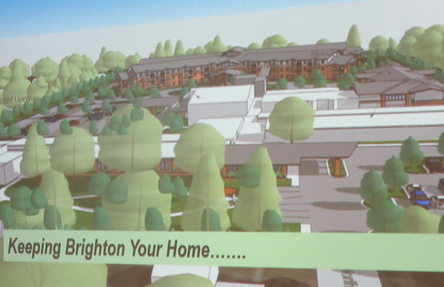 A developer will have a few more months to complete final plans for a proposed senior housing development at the old Lindbom School site in the City of Brighton.

Developer Pat Battaglia plans a 210-unit, 14,000-square-foot development, called Brighton Village at the Mill Pond, that would include independent living, assisted living, a memory care center and an activities center on the 10.5-acre site. The project previously received Planned Unit Development (PUD) preliminary approval, which gave him six months from that date to return to the Planning Commission with a final site plan and an established contract between Battaglia and the city; however the six-month mark is approaching in the second week of June and Battaglia has yet to do either. He came before the Planning Commission Monday with a request for an extension.

Battaglia told commissioners the project's engineering is complete, but that he is still working on the architectural aspect of the senior apartment buildings. He added that lease contract negotiations with the development's two operators, Charter Senior Living of Naperville, Illinois and Village Crossroads of Warren, Michigan, had caused delays.

But several commissioners appeared to be concerned or frustrated, noting that Battaglia has had a significant amount of time to work through details as the current proposal is virtually identical to the one approved by the Planning Commission in 2015. Battaglia has twice tried to develop the site; first proposing a charter school and later a senior housing complex, both of which obviously fell through. Chairperson Matt Smith says he wants to see something done with the property, but is now skeptical that that will happen. Commissioner Steve Monet said in his 25 years of being on the commission and council, he has never seen a development take this long to come to fruition.

Many of the Planning Commission's members voiced feelings that if they were to grant Battaglia an extension, it would not be a lengthy one. Both Councilmember Susan Gardner and Commissioner Ken Schmenk said the extension is the final straw. The Planning Commission ultimately voted five to one to grant Battaglia a 90-day PUD extension; beginning the day the original six-month allotment expires. He will be required to have his final site plans prepared and presented to the commission by the end of the extension period, and to have a contract with the city in place. (DK)