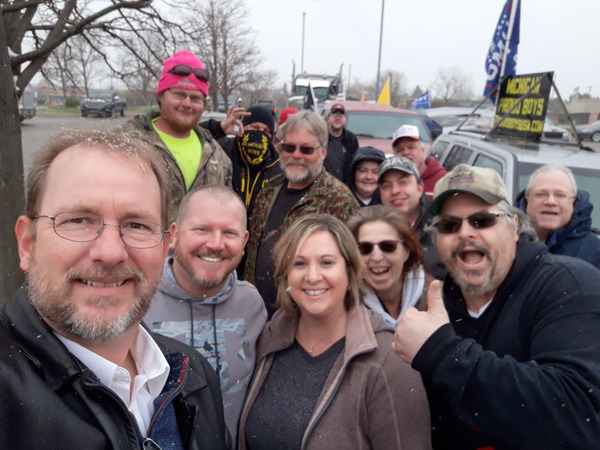 
8th District GOP Congressional candidate Mike Detmer has re-posted the selfie he took Wednesday with a member of the Michigan Proud Boys and is now defending the group. He had originally removed the photo after it created a public backlash.

Here is his statement in full;

“JUST GOT OFF THE PHONE WITH ENRIQUE TARRIO - NATIONAL CHAIRMAN OF PROUD BOYS!
This photo was made controversial because a man wearing a Proud Boys face mask entered the shot. Local media ran stories that I was associated with a "white supremacists" group! Did some research and had a great discussion with a couple top members including Enrique Tarrio (WHO IS NOT WHITE). THEY ARE NOT WHITE SUPREMACISTS NOR RACIST! Some claimed that the FBI deemed them a "hate group"... FALSE!!!
In fact, their membership includes Blacks, Whites, Latinos and Asians! It also includes some gay individuals. Furthermore more, Proud Boys is about protecting our freedoms and has engaged and defended people and organizations from attacks by ANTIFA! Oh, and the hand gesture?...created by 4chan in 2017 to tweak Liberals! Has NOTHING to do with white supremacists.
Bottom line...this was an attempt to attack my character!
Here are their tenents(sic):

Reinstating a Spirit of Western Chauvinism
We adopt the blatant and unapologetic promotion of Western Civilization, which is characterized by a secular government whose legal code is informed by Judeo-Christian ethics and whose origins lie in the Greco-Roman tradition of the Republic. The primary values of the West are personal liberty, self-determination, the sovereignty of the individual, and the sanctity.

Minimal Government
One of the things that makes the West truly the Best is that we are able to--and choose to--govern ourselves with honesty, fairness, and responsibility. The more prominent role that culture plays in influencing human behavior, the less necessary it becomes for governments to intervene. Therefore, let us celebrate and uphold Western wisdom, and may the government stay out of our way.
"The best government is that which governs least... Government should have as little as possible to do with the general business and interests of the people." --John L. O'Sullivan, 1838

Maximum Freedom
The growth of the West has always been characterized by a steady increase in personal liberty, which the Founding Fathers of the U.S. believed were granted by their Creator, not by any government. The documents they signed served to enshrine that liberty and uphold the sovereignty of the individual. One principle that must accompany freedom that many overlook too easily, these days is personal responsibility. Maximum Freedom cannot persist without the fulfillment of duty.
"Give me liberty, or give me death!" --Patrick Henry, 1775

Pro-Free Speech
"Congress shall make no law respecting an establishment of religion or prohibiting the free exercise thereof, or abridging the freedom of speech or of the press, or the right of the people peaceably to assemble and to petition the government for a redress of grievances."

Pro-Gun Rights
"A well-regulated militia being necessary to the security of a free State, the right of the people to keep and bear arms shall not be infringed."
MOLON LABE - COME AND TAKE IT

Closed Borders
The West is the Best. That's why it is the number one destination for immigrants across the world. Nowhere else can you find the same combination of freedom, safety, prosperity, infrastructure, and decency. But we cannot be the world's orphanage. To those willing to travel, to suffer the journey, and to risk their lives: Fight for a better world back home, and Godspeed. To those willing to defy the sovereignty of our borders and expect a handout upon arrival: Fuck off, we're full.

Glorifying the Entrepreneur
We celebrate and honor the ones who risk everything to improve our lives. The inventor. The job creator. The men whose failures and innovations have shaped the modern world. The true enemies of poverty. Fortune to the bold. Glory to the brave.

Venerating the Housewife
This is not a mandate to women on how they should live their lives. Rather, we acknowledge, appreciate, and exalt any woman who would choose to stay at home, raise her children, tend her hearth, and be her husband's first and most ardent ally. She creates human life, shapes it, and builds the communities in which we live.

Anti-Political Correctness
The First Amendment protects a God-given right: the freedom OF speech, not the freedom FROM speech. Policing the expression of others for fear of being offended is not a right. In the war against tyranny, language is the front line. If we relinquish our right to be crude, crass, and colorful, then we also relinquish our tongues, along with our thoughts, and finally our spirit.

Anti-Drug War
An endless war of countless casualties. Policies that bury the addicted, rather than reform them. It empowers the wicked and emboldens the corrupt. The prohibition of certain chemical substances and medicinal plants has fueled the rise of violent regimes which have ruined our neighboring nations and destroyed our local communities.

Anti-Racial Guilt
Let no man be burdened with shame for the deeds of his ancestors. Let no people be held accountable for things they never did. In most cases, not even their own family line can be proven responsible for past transgressions. May we right the wrongs of the past as one people, rather than perpetuate the plague of division which caused them in the first place.

Anti-Racial Superiority
Let us recognize the progress that has been made in overcoming racial prejudice. The West has become a place that judges its citizens on their actions, not their attributes. This is true, not only legally, but also culturally. Racism may be alive, but it is not well. And it will continue to dwindle so long as we continue to uphold our Western values. Race-based politics should have no place in a society that is willing to end racial prejudice.”

As WHMI reported Wednesday, Detmer had gathered with supporters in the Art Van Furniture parking lot in Genoa Township before heading to the “Operation Gridlock” protest being held in Lansing to protest Governor Gretchen Whitmer’s executive “Stay Home, Stay Safe” orders to keep people at home and non-essential businesses closed during the coronavirus outbreak. A picture from Detmer’s Facebook page showed him taking a selfie with about a dozen people, including an individual wearing a Proud Boys face mask, flashing a gesture recognized by many as a white power symbol. But Detmer now rejects that interpretation and says it started as a joke by members of the online group 4chan.

The photo generated much controversy, mostly centered on the lack of social distancing among the group as evidenced by the lack of masks and people gathered closely together, Detmer has asserted that everyone was wearing masks – they just took them off for the photo, although none can be spotted in the photo other than the man wearing the Proud Boys mask. He says he asked them to come in for a quick selfie, it was a quick in-and-out shot, the masks went back on and away they went.