Detective: Prosecution "Well Aware" Of His Relationship With Judge 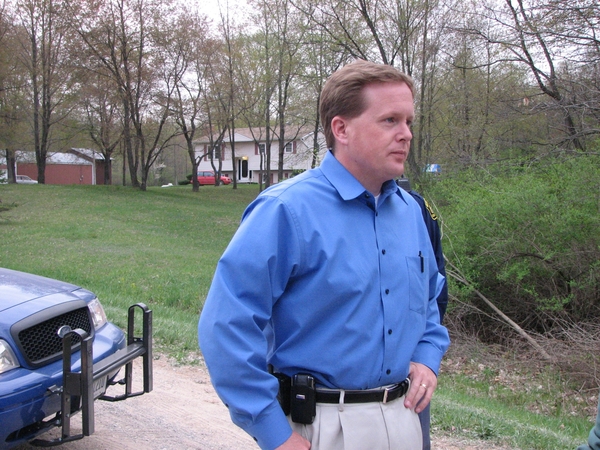 Livingston County Prosecutor Bill Vailliencourt is being asked to resign following the release of a deposition by a former Michigan State Police detective that has cast further doubt about the impartiality of the prosecutor’s office during the murder trial of a man whose conviction has since been vacated.

Howell attorney Tom Kizer sent the request Tuesday to Vailliencourt in the form of a letter (posted below) detailing testimony by now-retired State Police Detective Sean Furlong in November of 2018 to the Michigan Attorney General’s Office. The AG’s office gave Furlong immunity from prosecution in exchange for his testimony concerning disgraced former Judge Theresa Brennan. She presided over the 2013 trial of Jerome Kowalski who was convicted in the double-homicide of his brother and sister-in-law in their Oceola Township home and sentenced to life in prison. That conviction was based largely on a confession by Kowalski that was elicited by Furlong. It was later revealed that Furlong and Brennan were having an affair. The failure to disclose that fact was a key reason that Brennan was removed from the bench last June by the Michigan Supreme Court.

Brennan was later charged criminally by the Michigan Attorney General’s Office for actions she took during her 2016 divorce to try and conceal the affair with Furlong. She pleaded guilty earlier this month to one of the charges, perjury, and will be sentenced January 17th. Following that plea, WHMI obtained a copy of Furlong’s deposition which contains some startling allegations about what prosecutors knew and did in regards to the relationship between Brennan and Furlong.

In the deposition, Furlong asserts that as the 2013 trial of Kowalski began, Assistant Livingston County Prosecutor Pam Maas was “well aware for years how close of friends Theresa and I were” and when asked why he was sitting at the prosecution table during the trial even though he was not technically the officer in charge of the investigation, he answered, “ ’cause Pam Mass wanted me to do her a favor, ‘cause I was friends with the judge and she knew it” inferring that Maas sought to use Furlong’s relationship with Brennan to enhance the prosecution’s case. Furlong was also asked at the deposition about what Livingston County Prosecutor Bill Vailliencourt knew about the relationship with Brennan. He answered, “…it wasn’t a secret. We talked about it all the time.”

In his letter to Vailliencourt, Kizer called those allegations “damning” and that they put the prosecutor and his office, “in the crosshairs of serious misconduct” as they dispute assertions by Vailliencourt that he and his office were unaware of the extent of the relationship between Furlong and Brennan, even though that very issue had been brought to the forefront just days before the trial began. On January 4th, 2013 Kizer sent a letter to Vailliencourt asserting that a potentially inappropriate relationship existed between the judge and Furlong and that the Prosecutor had, “the ethical obligation to fully investigate this issue and provide the proper relief in order to assure the integrity of our judicial system. The judge has apparently not done so. It falls upon your office to correct this matter before a greater injustice is created.” When questioned about this later, Vailliencourt told WHMI that his office, “did everything at the time that could have been done” including immediately notifying defense counsel and that the matter was promptly addressed in court.” Vailliencourt said that it was only after specific evidence was received in 2017 that he “immediately requested investigations by the appropriate authorities to determine what the facts are.” Based on the details of those investigations, which included the State Police and Michigan Judicial Tenure Commission, Vailliencourt earlier this year vacated the conviction.

However, Kizer says that was almost two full years after Assistant Prosecutor Shawn Ryan testified during Brennan's divorce case that the former judge admitted kissing Furlong in 2007 and that there were regular meetings for drinks as well as a party at Brennan’s home where women, including Brennan, went ‘skinny dipping’ while Furlong was present. There were also annual vacations and trips to Brennan’s cottage and Christmas shopping trips to Somerset Mall. Kizer says that information, combined with Furlong’s deposition, makes it clear Vailliencourt failed to speak up when he should have. Kizer contends Vailliencourt has, “disgraced the office of the Prosecuting Attorney and helped to make our legal community the laughing stock of the state” and “should now resign and demand that Ms. Maas do the same. You owe a duty to withdraw immediately as Prosecutor in this case and request the Attorney General to assign an independent Prosecutor…to examine all the issues involved in a retrial and to represent the interest of the State in doing so.”

A new trial for Kowalski is set to begin next month. However, the confession that was central to his 2013 conviction will be problematic at best as evidence. Kowalski almost immediately recanted it and claims he was coerced by Furlong into making it. In addition, Furlong’s testimony in the original trial is now shaded by the subsequent revelations about his relationship with Judge Brennan, which will surely be addressed during the re-trial. There is also no known physical evidence that links Kowalski to the crime, such as DNA or fingerprints, and the gun believed to have been used in the murders was never located.

In response to the allegations made in Furlong’s deposition, Vailliencourt made the following statement to WHMI:

“It was generally known that Furlong and Brennan were friends at the time. That's not new. But we did not know of the extent of their friendship as subsequently outlined by the Judicial Tenure Commission or that they were contacting each other during the trial. And Furlong was a highly experienced homicide detective, so having him at counsel table along with Detective Poulsen during a highly complex case was not unusual or out-of-the-ordinary. Proceedings involving investigative subpoenas are confidential by both statute and court order so I am prohibited from discussing them. To the extent you have questions about those proceedings, that is something you'd have to direct to the Attorney General's Office. This matter is scheduled for trial next month, where the focus will be where it should be: the deaths of Richard and Brenda Kowalski and whether the evidence proves Jerome Kowalski's guilt beyond a reasonable doubt. That has always been the focus of this office since these murders were committed in 2008 and it will continue to be.”


The Michigan Attorney General's Office declined to comment when asked about the discrepancies between Furlong's deposition and the statements by Vailliencourt to the contrary. (JK)

Pictured is Detective Sean Furlong at the scene of the Kowalski double-homicide in Oceola Township on May 1, 2008.