Despite Worries of Violence, Protestors Gather Peacefully In Howell 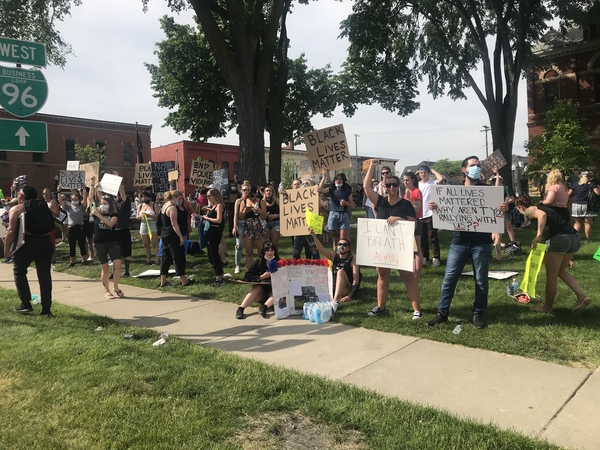 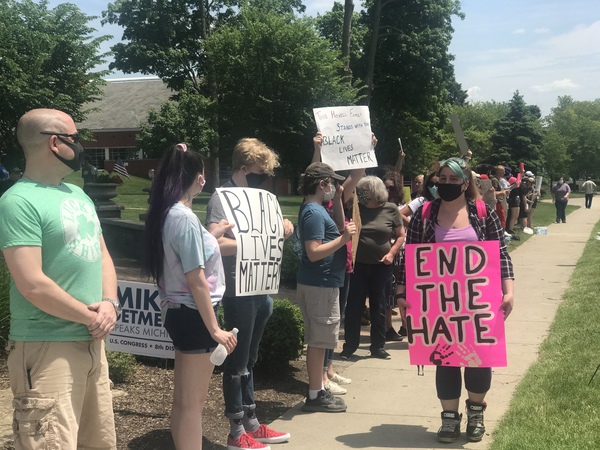 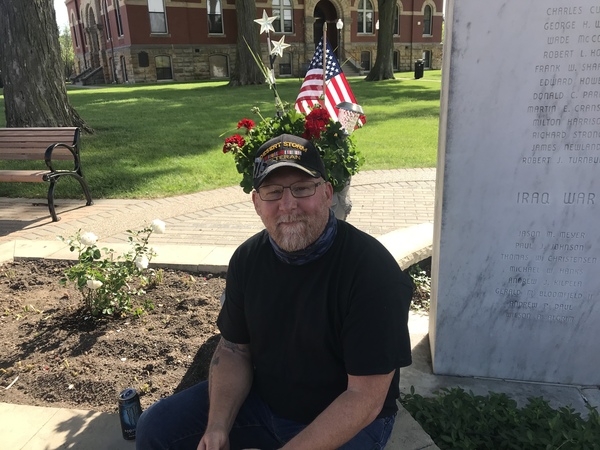 
Despite concerns over violence and clashing ideologies, it was a peaceful scene this morning as several dozen people turned out to the lawn of the historic courthouse in Downtown Howell. As the day wore on, more protestors turned out, but things still remained peaceful.

On Wednesday, city officials said that out of an abundance of caution they were closing several city and county buildings in the downtown area after a planned protest over the killing of George Floyd last week in Minneapolis. Floyd was African American, while the police officer was white. Organizers of the original protest postponed the event over concerns about violence, although another has been scheduled for 3-8pm today. In the interim a gun-rights group, the Michigan for 2A Sanctuary Counties - Livingston, urged its members and others to gather this morning on the courthouse lawn to try and deter any violence like that seen in other cities across the country.

But it was a rather tranquil atmosphere as about two dozen members of the group gathered near the veterans memorial around 10am. One of them was Thomas LaMay of Howell. The Gulf War veteran said he had no problem with people planning to peacefully protest Floyd's death. "I don't mind protests, but please don't riot. There's no reason to riot in Howell. We welcome you all. I don't know what businesses are open and what businesses are closed, but the one that are open will welcome you just as well." As to the reason behind the protests, LaMay, a Gulf War veteran, said he absolutely understood. "I'll walk with you. I believe the George Floyd thing was wrong. That officer should be held accountable and he is arrested. I think he should get life in prison or even death row."

Around noon, dozens more protestors arrived carrying signs supporting the Black Lives Matter movement and lined Grand River as passing cars honked in approval, eliciting cheers. By 4pm, there were several hundred protestors holding signs and chanting slogans like "No Justice, No Peace" and "Say His Name - George Floyd". At one point, the crowd yelled in unison "I can't breathe" for nearly nine minutes, a reference to one of the final statements Floyd made while the officer kept his knee on his neck until he died.

Anna Wysocki of Ann Arbor was one of the protestors who showed up early. She had a sign that said, "DE-MILITARIZATION, MORE CONVERSATION, BLACK LIVES MATTER, LET'S TALK" Wysocki grew up in Howell and says the city's reputation as a racist haven is contrary to her experience, but that doesn't mean there isn't work to do to try and improve. "Those of us who think we are allies and that we are progressive community, those of us who want to defend the image of Howell, we have to not be silent. We have to be pretty loud about it. We have to make sure people know this is a welcoming and safe place and I don't think people know that." Wysocki said she was glad to see the 2A group members not openly carrying any military-style weapons, which she feels could intimidate others who seek to peacefully protest.

One of the 2A group members, who would only identify himself as Mark, said they were fully in support of those wishing to exercise their First Amendment rights, but just wanted to be present so that things didn't get out of hand. "We're all here to see a peaceful demonstration and a peaceful rally. We all think what happened to George Floyd is a horrific thing. We don't really quite understand the protest because there's not two sides to it. Everybody here thinks the same thing. We're glad to see the cop that did it in jail. We're glad to see the cops that stood by while he did it in jail."

While everyone was getting along, there were some divergent opinions. 18-year-olds Holly Klasko and Madison Rodriguez of Howell, carried signs that said "Black Lives Matter" and "One Race Human Race". Klasko told WHMI that the protests taking place across the country are about a larger issue that has remained unresolved for too long. "Basically I just want the criminal justice system to be fixed because it always has been biased I think, in my opinion. I'm glad this whole thing is happening so it can finally open up more people's eyes to realize that it has been biased for years and this isn't just a new thing."