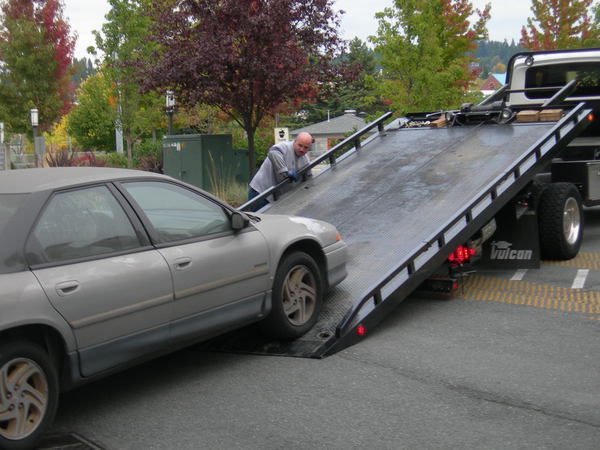 Some questions are being raised about the towing policy of the Livingston County Sheriff's Office.

The Livingston County Democratic Party issued a press release (posted below) about a decision made by former Sheriff Bob Bezotte in 2013 to move to a single company, Corrigan Towing, for services - versus traditional practice of rotating towing companies. Democrats allege it raises ethical questions since the company contributed donations to Bezotte’s political campaigns. The press release further alleges the move was not supported by current Sheriff Mike Murphy, who clarified he did in fact support the move but would have pursued a different process. Democratic Party Chair Judy Daubenmier maintains the switch raises some ethical questions, such as a government agency selecting a single source for a service, like towing without bids, and that entity has owners who make political contributions to the people making the decisions. She says it doesn’t look right and a fair bidding process should have been followed as a lot of other towing companies in the county would have been eligible to bid. Instead, she alleges Republicans who supposedly favor small business are shutting them out from government work and then receiving campaign contributions.

Murphy tells WHMI he was in favor of moving away from the rotation system because of all the issues they had, adding Bezotte was within his rights to do so. However, Murphy says he honestly would have handled it a bit different and put out a request for proposals with specific parameters for the contract bids – adding more than likely it would have ended up being Corrigan anyway. Murphy says Bezotte was solely within his rights to choose a single wrecker company and he chose Corrigan. Murphy says if a vehicle is blocking the road or needs to be towed, they need it to be done in an expedient, professional manner. He says there was a long history of issues and some companies were a bit unscrupulous so the sheriff at that time just got tired of dealing with the wrecker issues and felt the simplest solution was to just utilize one company. Murphy says it also makes it easier in dealing with complaints. He clarified that doesn’t mean Corrigan is exclusive so if someone has a preference, then by all means they’ll use that company because at the end of the day, it’s all about the service.

Murphy says it is unfortunate some are trying to make political, adding when he took over, it was a case of “if it’s not broke, don’t fix it.” He noted that Corrigan has a stable of wreckers and resources over and above others, referencing a situation at Mount Brighton in which a person got caught in chairlift and crews came out with a specialty plasma welder cutting tool to free the person - more than likely saving his life. Murphy says another case in point was the extreme pile-up on I-96 near Fowlerville in December of 2016 that involved 53 vehicles and left three people dead. Murphy says Corrigan came out with wreckers and heavy equipment and they were able to do preliminary investigations, get vehicles towed and the expressway re-opened in less than 8 hours, which was he says was phenomenal considering a similar crash in Kalamazoo County that shut down the freeway there for three days. Murphy questioned why he would switch when at the end of the day, he has a resource like that who he call that comes out and gets the job done, adding it doesn’t make any sense. Murphy added the Corrigan family has been very philanthropic and politically active in Livingston and other communities and you won’t find a family more generous so to call it a kickback is just wrong.

Some local towing companies have raised issues about the change. Ben Marhofer of Pardiac Towing says they have high reviews and ratings online, and you don’t get those from bad business practices. They have business locations in the Cities of Brighton and Howell. He says his family has been in business in the county since 1984 and involved in the community for a long time, so he feels to get shut out like they did was not real fair and things should change. Marhofer says the switch from the longstanding rotation system to a sole service provider was made with no real good reasoning and it was never up for debate. He says no letters were sent out, it just happened and towing companies noticed when their phones just stopped ringing. Marhofer says there very well might not be any scandal but it looks bad for the county to have one towing company without any bid process or formal arrangement as nothing is on paper and it just seems funny. He says there were eight companies in the old rotation system, five of which are no longer in business and requests to go back to the old system have fallen on deaf ears. Marhofer says he’s been to Board of Commissioners meetings, and did talk with Bezotte briefly at the time. He credited Murphy for taking time to meet with him, although he wasn’t necessarily pleased with the final decision. Marhofer says police towing is the highest profiting sector of the industry, and tends to pay well, which makes for a large portion of income for most companies. He would prefer the county went back to a rotation system and perhaps tweak it so it’s not tolerant to any shenanigans such as price gouging, adding he thinks competition drives everyone to be better and there are a lot of benefits to be had.

Murphy said he did meet with Marhofer, who has a good business model and they had good conversations but it’s a business decision – adding he doesn’t care who the wrecker is and just wants professional service. A new rotation system would involve six companies and Murphy says he’s not going back down that road because things are working just fine. (JM)