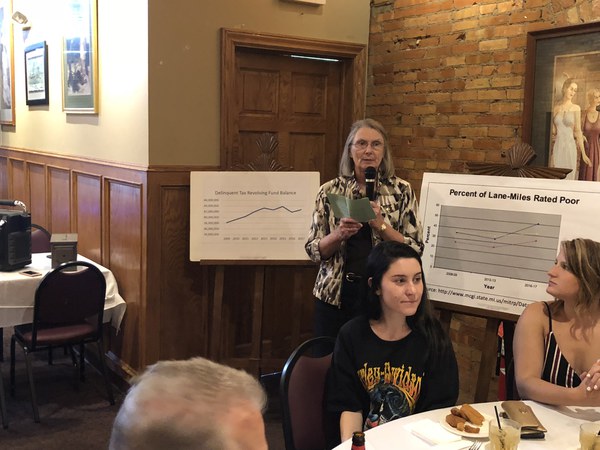 Area Democrats have proposed a plan that they say would help fix many of Livingston County’s crumbling roads.

The Livingston County Democratic Executive Committee held a meet-and-greet fundraiser in Howell, Tuesday night for their 6 candidates for the County Board of Commissioners. During the session they unveiled a major policy announcement that said could bring repair and reconstruction to many roads in the county.

Democratic Party Chairwoman Judy Daubenmier said they have been aware of how the county’s Delinquent Tax Revolving Fund Balance has risen since the recession. That fund is grown by interest and penalties on late property tax payments, and as of the last financial report December 31st, stood at $42.7-million. County Commission District 6 Candidate Kelsey Helton revealed the party’s plan to the approximately 75 people in attendance. Under it, $5 million of the $10 million would go to the Livingston County Road Commission. The other half would be reserved for a matching program with township and city governments. She pointed at County Commissioners and Republicans in Lansing for failing to take action, and that they “are tired of waiting on the state to come in and fix our infrastructure.” This inactivity, she said, has caused many local governments to ask voters for road millages, or to form special assessment districts. She said that for living in a “commuter county,” none of the Commissioners work outside of it. Helton said, as-such, they’re less likely to see the damage the roads are causing to vehicles, which when needing to pay for repairs, is the equivalent of an extra tax.

Daubenmier called the plan an innovative solution to problem that “bedevils all of us.” She said the plan doesn’t cost the people anything or raise taxes; that it uses money that is just sitting there when it could be put to work. The Chairwoman said she that the $10million investment would still leave over three-quarters of the fund available to make pension contributions and for emergencies without jeopardizing the county’s financial position. She also pointed towards Macomb County for considering the same plan of action, while have a smaller percentage of poorly-rated roads than Livingston.

The party reports that in the past 5 years, the percentage of lane-miles in poor condition has risen 18 points to just over 50% in Livingston County. (MK)