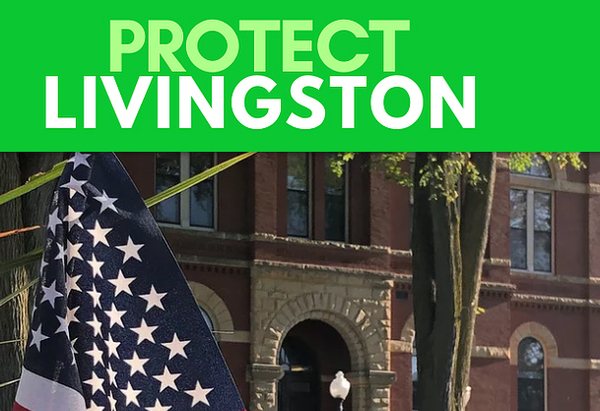 Democratic Chair Judy Daubenmier issued a press release Monday (posted below) saying that Commissioner Donald Parker, the Republican chair of the county board of commissioners, is behind the website ProtectLivingston.com and a corresponding Facebook page. She says while the website domain does not have a name attached to it, the Michigan Department of Licensing and Regulatory Affairs website indicates a non-profit corporation named Protect Livingston was formed by Parker on October 15th. (see filing below) She also notes that a Facebook page for Protect Livingston made its first post on October 11th, the same day that the website domain was registered.

The “About” section of the Facebook page says: “Families call Livingston County home because of our great quality of life, clean environment and enjoyable cities, townships, lakes and more. Join us as we keep each other informed of community events and key issues!” Daubenmier claims the fact Parker’s name is not on the website or Facebook page raises questions about its intent. “What do Republicans like Donald Parker have to hide that they won’t put their name on a Facebook page and a website? What other creepy things are they doing on the internet to fool voters into supporting them? The posts so-far are innocuous items about community events, so why the secrecy?” She adds that because the page is authorized by Facebook to run social and political ads, “it should raise red flags about what is planned for later – untraceable political ads and posts designed to subtly build support for Republican office holders while keeping the Republican link secret?”

Daubenmier says as a nonprofit, Protect Livingston could spend unlimited amounts on issue advertising or attacks on other candidates without ever disclosing its donors of so-called “dark money.” Furthermore, she says the public has expectations that elected officials like Parker, “will act with more integrity than to hide beyond secret websites and Facebook pages.”

In response to the press release, Commissioner parker issued this statement;

"We created Protect Livingston as a non-partisan community forum where hundreds of residents are freely discussing and exchanging ideas on issues impacting our community, including traffic, the environment, noise, pollution and sustainable development. For example, we’ve got a company wanting to put a massive auto scrap processing plant steps from downtown Howell that adversely affects all of these issues and threatens the overall quality of life for our neighbors. With Judy, it’s all about partisanship. Her totally false accusations only serve to have a chilling effect on our ability to have thoughtful conversation about pressing community issues."

When asked why his name wasn't identified as the website and Facebook page creator, Parker would only note that his name is listed on the Facebook page as one of the people who like it and his involvement is very public in the public filings for the non-profit. He also asserts that Daubenmier's, "reckless accusations are totally false and only seek to get in the way of the hundreds of people already participating." (JK)