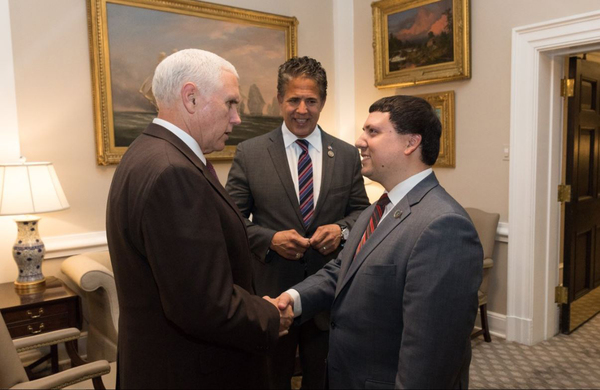 During Autism Awareness Month, the 8th District Republican joined Lansing resident and autism advocate, Xavier DeGroat at the White House for a meeting with Vice President Mike Pence. DeGroat is the founder and CEO of the Xavier DeGroat Autism Foundation, a 501c3 organization established to support individuals living with autism. Bishop called Xavier “a remarkable young man” who shared his story with Pence, “along with his hopes to educate individuals to focus on the ability, not the disability.”

DeGroat said that throughout his early life he had doctors and professionals tell his family that because he had autism he wasn't going to succeed, but that made him “very motivated to disprove any doubters . . . and fight for autism awareness as an advocate,” adding that as he organizes movements, food outings with his dad, and do charity donations to Habitat for Humanity for low-income autistic individuals, he hopes to share his journey and networking with leaders in a story called ‘Autism Adventures’ and that he wants to show that, “people with autism can be their own leaders.”

The Vice President later Tweeted about the meeting, calling Xavier, “a courageous advocate for autism awareness and all Americans with disabilities.” (JK)