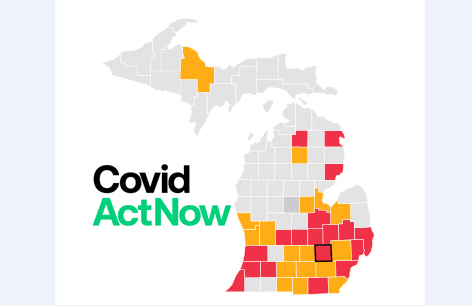 New data modeling has Livingston County among those counties in Michigan that are at increased risk of a rising tide of COVID-19 infections.

COVID Act Now is a disease modeling effort that is working in partnership with the Georgetown University Center for Global Health Science and Security and the Stanford University Clinical Excellence Research Center. It is one of the models being used by Michigan Gov. Gretchen Whitmer’s administration to evaluate actions at the state level in regards to COVID-19. According to Michigan Advance, which first reported on the modeling Wednesday, it is also known as the most aggressive, or pessimistic, data model.

But while it downgraded Michigan as a whole from being at “high risk” for reopening earlier in the week to “moderate risk” it also lists Livingston County as at an “elevated risk”. That’s based on several factors that the modeling takes into account; COVID case growth, testing capacity and ICU safety margin. Livingston’s infection growth rate is classified as “medium” risk at 1.06, which means that on average, each person in Livingston County with COVID is infecting 1.06 other people. “Because this number is only slightly above 1.0, it means that COVID is growing, but slowly.”

As of Thursday, the Michigan Disease Surveillance System listed 453 cases of COVID-19 in Livingston County, of which 366 are confirmed. 282 people have recovered from the disease; while there have been a total of 20 deaths. That compares to 45,054 cases and 4,250 deaths statewide.

As for testing capacity, there is no data available for that, which leaves the final metric of ICU safety margin as the main factor that places the county into the elevated status. According to COVID Act Now, Livingston County has 8 ICU Beds, all of them located at St. Joseph Mercy Livingston Hospital in Howell. Normally, five of those beds are unoccupied. With an estimate of 7 COVID cases currently in the ICU, or 140% of typically free beds, the model suggests the county’s healthcare system is “not well positioned to absorb a wave of new COVID infections without substantial surge capacity.”

Another aspect is a projection of future hospital capacity, and while the model says that hospitals in Livingston County are unlikely to become overloaded in the next 3 months based on current trends and interventions continuing, if all restrictions were completely lifted today, hospitals in the county would overload on June 5th, peaking by June 12th at 237 hospitalizations for just 177 available beds. Again, that is a worst-case scenario and not one likely to occur with a phased-in approach to reopening the economy.

But it also not the only model that places Livingston County among those vulnerable to a quick reopening of the economy. A recent study by William Frey, a Senior Fellow at the Washington, D.C.-based Brookings Institution, used data available from the New York Times and the U.S. Census Bureau. It included Livingston County as among 1,100 counties across the nation that achieved “high-prevalence status” for COVID-19 in the last five weeks. Frey says the view of those areas impacted most by COVID-19 as “broadly urban, comprised predominantly of racial minorities, and strongly vote Democratic” may have been true in the first weeks of the pandemic, but that during the first three weeks of April, “new counties showing a high prevalence of COVID-19 cases are more suburban, whiter, and voted more strongly for Donald Trump than counties the virus hit first.” Livingston County, which voted for Trump by a 62% margin, is listed as among that group, achieving the status between April 6th and the 12th. Frey concludes that as COVID-19 spreads, “it appears to be occurring in areas with more middle-income populations” that are “less likely to fit demographic stereotypes that the public and some political activists attribute to COVID-19-affected places.”

One of the more optimistic models of the disease comes from the University of Washington’s Institute for Health Metrics and Evaluation (IHME), which has often been cited by the White House in making their case that the economic impact from the COVID-19 shutdown is not necessarily justified by the virus predictions. But even that model was updated this week, nearly doubling the predicted deaths in the United States from COVID-19. In April, it said that by mid-August there would be 72,433 deaths. It is now predicting 134,000 because of what the institute’s director, Dr. Christopher Murray, called the "premature relaxation of social distancing." The IHME does not provide a county-specific model of the disease.

Simultaneous to the ongoing debate over the spread of the virus and how best to keep it in check, are the bleak economic effects that the shutdown has produced. According to figures released Thursday by the U.S. Department of Labor, nearly 3.2 million laid-off workers applied for unemployment benefits last week, 69,000 of them in Michigan, as the business shutdowns caused by the viral outbreak deepened the worst U.S. economic catastrophe in decades. Roughly 33.5 million (1.3 million in Michigan) people have now filed for jobless aid in the seven weeks since the coronavirus began forcing millions of companies to close their doors and slash their workforces. That is the equivalent of one in five Americans who had been employed back in February, when the unemployment rate had reached a 50-year low of just 3.5%. The starkness of those actual statistics compared to the hypothetical projections of the virus’ spread make it easier to understand the lack of consensus on how best to proceed, even when those projections are based on a solid scientific footing.

As for COVID Act Now, it concludes that the decision whether or not a state or county is able to reopen safely is “a complicated case-by-case decision and includes other factors such as PPE availability, ability to trace positive cases, and much, much more.” Still, it concludes that a rapid reopening of the state’s economy could result in reversing the state’s gains over the past six weeks in flattening the curve of virus transmission and protecting the health care system from being overloaded.