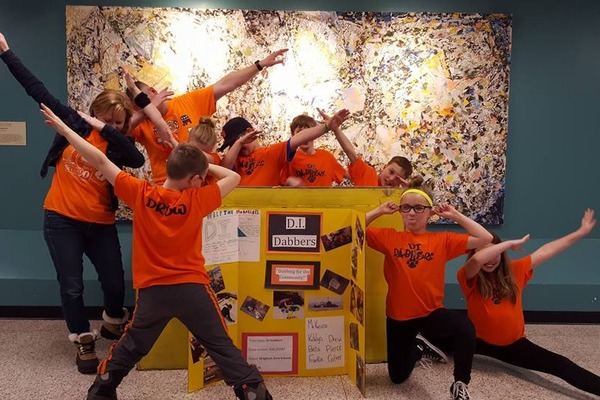 The DI Dabbers, a team of seven 4th and 5th graders from Hornung Elementary and Maltby Intermediate, placed first at the Michigan Destination Imagination State Tournament earlier this month at Michigan State University.

As part of this year’s challenge, the team was required to create a play about their service project, in which they held a drive to collect items for the homeless. They created backpacks and distributed them to homeless shelters in Ann Arbor this winter. They also competed in an instant challenge, and team officials say they did so well it earned them an overall 1st place rating.

Alison Smith is one of the team’s managers and said the surprise of hearing over the Breslin Center loudspeakers that a brand new Destination Imagination program from Brighton Area Schools would go to the global competition was indescribable. Smith described the “sheer joy” on the kid’s faces as they ran down to accept the award and that everyone is proud to represent Brighton. She also predicted that the Destination Imagination program would grow exponentially in Brighton.

However, the team will need help funding their trip to Knoxville and will be holding several dine-in fundraisers at various eateries in the area. The first is a Buffalo Wild Wings Night in Green Oak Township next Monday, April 30th. 20% of proceeds will be donated to the team if you mention it to the server. The second dine-out event is at Panera Bread on Grand River in Brighton on the evening of Friday, May 11 from 4-8:00. Panera is another event where 20% of proceeds will be donated. Finally, the team has secured Sunday evening 4-8pm, May 20, at Chipotle on Grand River in Brighton. For the final event, 50% of proceeds are donated to Destination Imagination.

Alternatively, people can donate or sponsor the team directly via their GoFundMe page. The link is below.