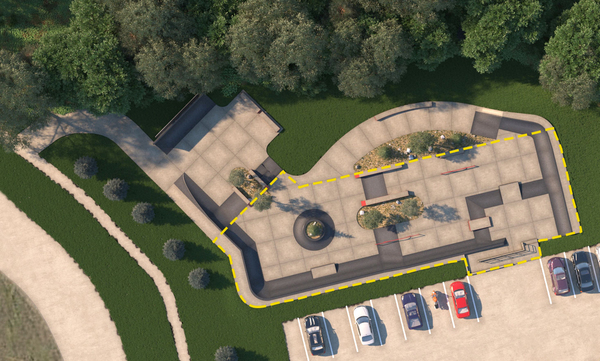 A crowdfunding campaign has been launched to hopefully make a skatepark project in the Village of Milford a reality.

The project would complete an ongoing collaborative effort in downtown Milford to revitalize an underutilized space by building a premier skatepark that would be accessible to people of all abilities and be connected to downtown. A crowdfunding is now being launched to hopefully raise $50,000 by April 12th. If that happens, then the project will win a matching grant through the Michigan Economic Development Corporation’s Public Spaces Matching Places program. MEDC Senior Vice President of Community Development Michele Wildman says skateparks create a safe space for youth development and recreation for everyone so they’re pleased to provide resources toward the effort through the program and hopefully this space to life. She noted communities make application for the program but are selected on various criteria. Wildman added that a lot of local work goes into these projects and it aligns well with their goal to reignite and repurpose vacant spaces into places the public can enjoy.

Parent Kristi Stempien is one of those leading local efforts and is hoping the community and local businesses will rally around this campaign to help reach their goal. She says many people have played a part in making this happen and worked very hard from grassroots fundraising to the village and township officials. If the crowdfunding is successful, Stempien says it would take the project over the finish line and the project is tentatively on schedule for this spring. She says the project has an intergenerational component in that the skatepark would be located close to the Milford Senior Center in Fairground Park, turning a completely under-utilized space into an incredible athletic amenity for the community.

Stempien tells WHMI it would be a plaza-style skatepark and to the naked eye, it would just look like a park with landscaping, benches and little garden areas. Stempien noted they talked with many communities and skate parks to find out what made them successful, as well as pitfalls.
Stempien says one of the best things is the park is walkable for kids in the Village. She says it’s a plaza-style skatepark and designed to just look like a park with landscaping, benches and garden areas but include all of the features skateboarders like to use in urban settings. Right now, kids in the area do not have a safe place to ride a skateboard, scooter or BMX bike. Stempien noted this will be a safe and legal space for the sport, instead of around downtown areas where it’s not so safe. She added that kids of every ability and experience level can participate as there aren’t any tryouts or expensive equipment required for the sport.

For more information or to donate, visit the web link provided. (JM)