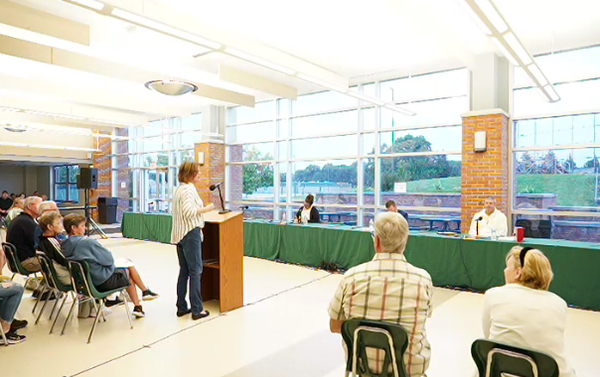 
The Howell Public Schools Board of Education was inundated with nearly two straight hours of public comment concerning a proposed change to the Health Education curriculum, much of it coming from residents adamantly opposed to what they believe will be indoctrination of their children with ideologies ranging from Marxism to Satanism.

At issue is a student-led drive to bring greater mental and emotional health support to their peers initiated by the Howell High School Lighthouse group, a student mental health team that promotes wellness among their classmates. They have proposed a change in the description of Health Education to include mental health disorders, depression, anxiety, suicide prevention, gender identity, LGBTQ+ awareness, and the impact of cyberbullying.

Organizers say the effort was partly a reaction to a 2018 self-reporting survey of Howell students which revealed that 17% seriously considered suicide with 5.8% having attempted it in the past 12 months.

However, that idea was quickly lost amid accusations that it embodied Critical Race Theory and was depriving parents of their responsibility to raise their children as they see fit. Many of the comments were highly critical of the efforts of the Livingston Diversity Council, with several speakers making sure to mention that Howell Superintendent Erin MacGregor was on the council’s Board of Directors.

Among them was Shelly Shpakoff of Hartland, who has been a frequent speaker at school board meetings in that district. On Monday, however, she made clear that her opposition to the proposed curriculum had to do with her personal beliefs about the morality of the LGBTQ+ community. "You members of the board, and you Superintendent MacGregor, have an agenda, and it's evil and insidious. Your connection to the Livingston County Diversity Council shows the evil agenda you are trying to bring to our community. This change to the health curriculum is nefarious and you know it. You are inviting demonic influences into our schools. There is nothing normal about sodomy, lesbianism, bisexuality, etc and that is said by God. Muslims believe this. The Jews believe this and the Christians believe this and I am here to speak on their behalf. This is sinful and it doesn't matter what you believe. It's not up to you to try to normalize and indirectly oppress religious groups of children that follow the God of Abraham. Stop trying to impose your Luciferian, self-idolizing, self-satisfying beliefs that contradict science on every level onto the children and citizens of Livingston County."

She was not alone in that point of view as at least half a dozen speakers invoked their personal religious opposition to what they see as sinful behavior and urged the board in general, and Superintendent MacGregor in particular, to heed their warnings of eternal damnation. One person who took a more moderate stance in opposition to the proposed curriculum was Sean Greer, who said mental health issues were complex and in need of more than just a curriculum fix. "Mental health, anxiety, and depression, those are all symptoms. We can't come in at a high school level thinking we have the expertise now to teach this when we don't even have a medical community that's doing any better. I'm the biggest fan of the Lighthouse Club. I think it's great that we have those types o committees of people that can speak up and bring things to the board. There's other avenues when it doesn't fit the whole community. When it doesn't get majority ideally."

But not all of those who spoke were opposed to the proposed addition to the curriculum. Tracy Flak of Howell is a former Howell High School teacher who has two sons in the district. She said it is precisely her concern for their well-being she hopes the board will approve the changes. "Less than two years ago a student of mine at this very school took her own life. I can't help but think of who might be able to be helped with the added curriculum. many of the students who are asking for these changes are former students of mine. I want these kids to know how proud I am of them. They have recognized the need for a change and are working hard to make this district and community better and I fully support this. I want you all to know, you are seen, you are loved and you are valued."

Also speaking was Howell High School senior Sara Reader, a member of the LGBTQ+ community who at the board meeting two weeks ago shared her story of three attempted suicides as a freshman because, in part, she believed she was not accepted for who she was. Reader said since that appearance she had been fired from her job by her Catholic boss and she had also been the subject of several social media posts ridiculing her. "Parents yelling at a kid, a 16-year-old, for who they are...I don't care if you call me a sinner. You say 'Love the sinner, hate the sin' but if you truly did love me, then you would be in support of me, which you are not, and you make that very, very clear. if you truly believed that all lives matter, then you would not have an issue with this curriculum."

After all of the public comment was concluded, Superintendent MacGregor said the proposed changes remain under consideration by the district’s Instructional Committee and then reiterated that the effort to provide additional mental health support was brought to them by the students themselves and it was a critical and urgent question that they needed to answer.

Board President Stacy Pasini then closed out the meeting by saying she was saddened to see the disrespect that was shown to Superintendent MacGregor and her fellow board members and reminded the audience that no decision had been made and asked for patience while they worked through the process.


Jon King is a member of the Livingston Diversity Council's Board of Directors.