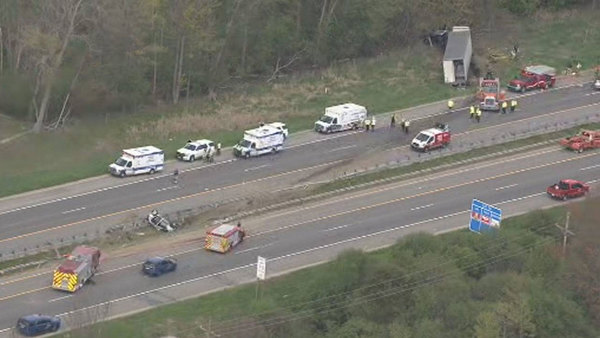 A major crash involving multiple vehicles shut down both directions of US-23 south of Whitmore Lake on Wednesday.

The crash happened shortly after 10am, just south of the 6 Mile Road exit, and shut down both the north and southbound lanes. Southbound US-23 remained closed until around 4:30pm. WDIV Detroit reports a semi was traveling on northbound US-23 between Six Mile and North Territorial Road when the driver reportedly fell asleep at the wheel and struck a northbound vehicle. The impact caused the semi to cross the median and hit a southbound pickup truck. Both the pickup truck and semi came to rest near a wooded area on the opposite side of the freeway.

Two people were said to be injured as a result of the crash. One was transported to the University of Michigan Hospital via Survival Flight and was in reported critical condition. Another person was also hospitalized and said to be in stable condition. The semi driver was not hurt. Photo Credit: WDIV Detroit. (JM)