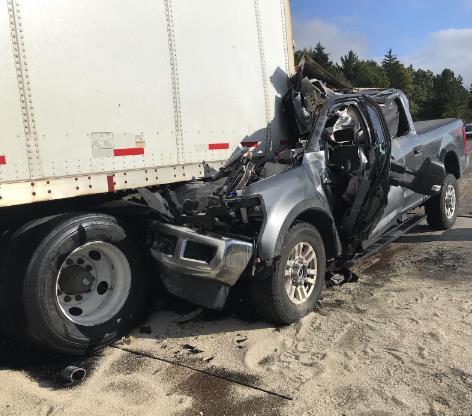 
An accident earlier this week in Tyrone Township sent one driver to the hospital and closed down a freeway for several hours.

The Livingston County Sheriff’s Office reports that at about 4:15 Tuesday afternoon, they responded to a report of a crash on northbound US-23 near Center Road.

Upon arrival, deputies discovered a 2018 Ford F350 that had been traveling northbound failed to stop for a tractor-trailer that was slowing down due to the backup for Owen Road construction. The lone occupant of the pickup truck was a 41-year-old Linden man who was transported to Genesys Hospital in Grand Blanc with non-life-threatening injuries. The driver of the tractor-trailer, which was operated by Kerry Transport out of Saginaw, was not injured.

Northbound US-23 was closed for approximately two hours for extrication of the victim and site cleanup. Officials say there was no indication of drug or alcohol use.