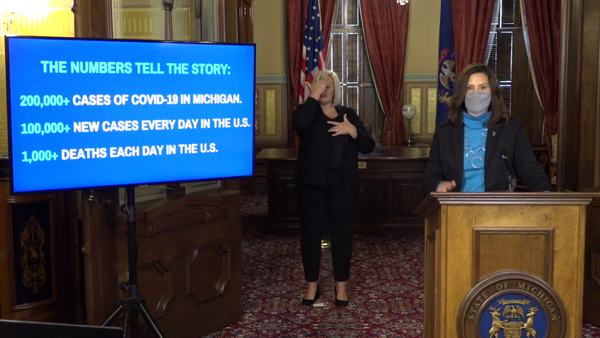 Whitmer hosted a press conference Thursday afternoon where it was stated there is now a 10.8% case positivity rate and numbers are increasing rapidly. It was stated the virus is out of control and there’s wide community spread across the entire state and hospitals are filling up very quickly – prompting concern about capacity. Whitmer said frontline workers have been putting their lives on the line and choose to put the health and safety of other people’s loved ones before their own but more nurses and healthcare professionals are getting sick outside of work - meaning more hospitals could be facing serious staffing shortages. The Governor said patient counts double in two weeks for an all-time high and hospitals could face another PPE shortage.

Rural Michigan was said to be getting hit the hardest but the virus is spreading rapidly everywhere with no area of the state spared. The Governor stressed that hospitals are nearing capacity and are burning through all of the PPE they’ve been working to stockpile because they’re overwhelmed. Whitmer said it’s “time to get our act together”, cautioning we could see a daily peak of deaths in Michigan come Christmas. The Governor said every day this past week the United States recorded over 100,000 new cases and the country is averaging over 1,000 deaths every day.
State health officials noted outbreaks are still occurring across the entire state and there are 747 active outbreaks being investigated – the highest number since the state started tracking and 25% more than last week. It was said because there are so many cases, contract tracing is tough and there are many people are walking around as close contact of positive case but they don’t know it and are spreading the virus.

Whitmer said the curve is no longer flattened but rather now a straight line that is trending straight up. She said the state is facing dire circumstances and it may be necessary to take some quick action – adding she has been very clear all along about putting the health and welfare of people front and center and will make decisions to keep people safe. The Governor said the situation is only going to get worse and more dangerous as people spend more time indoors. She further asked that people limit trips and gatherings; saying just because someone can do something or it’s allowed - doesn’t mean it’s smart. Governor Whitmer said she’s considering all actions that she can take to keep Michiganders safe. She acknowledged that everyone is fatigued but said if the numbers continue their trajectory steps, then there’s no question they’ll have to take additional steps.

Senior Vice President Dr. Karen Kent VanGorder with Sparrow Health Systems commented that hospitals are very quickly going through their surge plans and all surge plans have their limits – saying it is concerning as a family doctor but also a person who lives in a community. She says people need to do whatever they can to stay well and not overwhelm hospitals systems. She stated grocery stores are where they think many healthcare workers are getting sick. VanGorder said with positivity rates going to 10% or higher; they can’t just go to the shelf and pull off more ICU nurses, pharmacists or physicians that are able to run ventilators and take care of wildly sick patients. She said those are just patients that will go without when those doctors and nurses have to be brought offline and quarantine.

Whitmer and others encourage Michiganders to download the new MI COVID Alert - an anonymous, no cost and voluntary app. It lets users know whether they may have recently been exposed to COVID-19. Users can confidentially submit a positive test result into the app and alert others in recent proximity that they may have also been exposed to the virus.