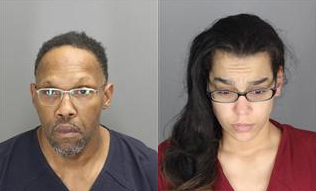 
A variety of charges were filed against a Lyon Township couple arrested over the weekend after following an unmarked police car.

The Oakland County Sheriff’s Office says two undercover detectives were in the Kensington Place mobile home community at Grand River and Kent Lake Road when they started being followed by an SUV with police-style lights in the windshield at about 3am Saturday. The detectives pulled the suspect vehicle over and questioned the occupants, 51-year-old Leonard Charles Harris, who was driving, and a passenger, 24-year-old Leanna Paige Garcia-Stowe. There were also two children inside, ages 1 and 2. A background check determined that Harris was a convicted felon and in illegal possession of a police-style emergency LED flashing light, along with a 9mm semi-automatic pistol; a semi-automatic starter pistol; a police-style badge; a set of police handcuffs; a police scanner and a spotlight. Also discovered in the vehicle was a plastic straw containing suspected cocaine residue. Harris reportedly admitted to the detectives he had used the police lights and other equipment to impersonate a police officer. After impounding the SUV, police turned over the two children to the custody of their grandmother. Harris was charged Sunday with being a felon in possession of a firearm and flashing lights, and possession of less than 25 grams of cocaine. Garcia-Stowe was charged with carrying a concealed weapon and the same drug offense. Both were released after posting bond. Detectives are continuing to investigate other possible instances of impersonating an officer.