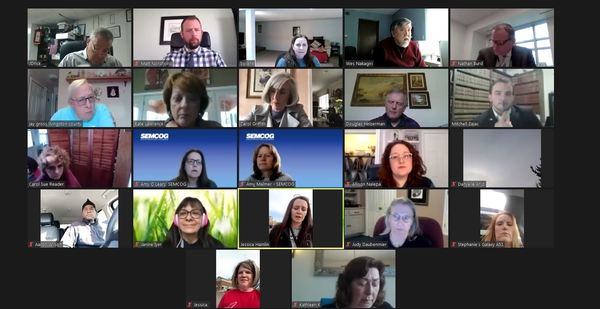 
After a lengthy debate in which confusion reigned over the definition of the word “emergency,” the Livingston County Board of Commissioners finally approved a declaration that allows the 20 county governing bodies to continue meeting virtually until May 31st should they so choose.

Commissioners were split but ultimately voted 5-4 in favor of a declaration of a local state of emergency. Current state legislation allowing for governments to hold meetings online expires March 31st. Without a declared state of emergency, boards, commissions and committees would have to meet in person while still adhering to state health department guidelines regarding capacity limits. Monday’s online meeting of the Board of Commissioners was attended virtually by 68 people. For that meeting to be held in person and to adhere to capacity orders, the county would require two separate overflow rooms with means for the public to interact with the board.

A declaration from the county would act like an umbrella that the other municipal governments could be covered under.

Several residents spoke during public comment, with the majority being against it. Despite the fact that the state’s COVID-19 case rate has spiked 77% over the past four weeks, the chief objections were that the data doesn’t support there being an emergency, it will have adverse impacts on schools and businesses, and that they want to get back to normal life.

Emergency Manager Therese Cremonte said that while she appreciates hearing the opinions of people impacted, there is some confusion about what the order does. “We heard a lot of heartfelt perspectives and observations on how some of our people in this county and in the state were impacted over this past year, and it has been a heavy year. This, however, has nothing to do with extending the MDHHS orders. I want to make that very clear. This is strictly to be able to conduct government business virtually. Period. That’s it.”

Commissioners debated long into the evening on the merits and legality of such a declaration and how it plays with the Open Meetings Act. Mitchell Zajac felt it was an overreach and Board Chair Wes Nakagiri said local governments can declare their own and they don’t need the county to do it for them. Several have within the county, including the Village of Pinckney which took all of five minutes to pass such a motion Monday night. But it was noted that at least the City of Brighton and Hamburg Township were waiting on the county to provide that “umbrella.” Nakagiri said he wanted err on preserving liberties for the county's residents.

Jay Gross represents Hamburg and said they wanted him to vote in favor and that he didn’t see continuing to meet virtually for 60 days as burdensome or illegal. He said he didn’t this declaration as infringing on anyone’s rights, alluding that to him it also seemed disingenuous to be 9 days from the deadline and just now start discussing the metrics and mechanics of meeting in person.

Commissioners in favor of meeting in person also debated a venue change for meetings that included Crystal Gardens, the EMS Building, or even the Historic Howell Courthouse, with the suggestion that perhaps stimulus dollars could be used to pay for that. Carol Sue Reader said she felt a 60-day extension was a no-brainer and asked if nine days was enough time to outfit a venue. County IT Director Kris Tobbe said his department could handle operating board and committee meetings, but hesitated when informed that includes all committee meetings including those like DPW and Veterans. He said they could get it done, but would be pulling resources. However, County Administrator Nathan Burd said that no matter how big the venue, they would still be limited to 25 people per room.

Doug Helzerman felt that COVID will be around longer than people think. He said at some point when they decide to make the decision it will be a jump or a leap and there will be risks. He said maybe they make the jump too quick, but he feels now is the time to take that jump and work out what follows.

Carol Griffith felt the discussion was missing the point, reiterating that the resolution allows them can cancel the state of emergency before May 31st. "You know I’m just kind of looking at this and thinking all the complications here and we’re all trying to think out of the box, who is going to take and what it’s going to take, and the resources it’s going to take and all of the different committees we have, and all of the county...and we don’t know how…we’re talking about 60 days here. We've got a sunset, if not before, no later than May 31st. I guess I think we’re making this more complicated than it needs to be."

Kate Lawrence said that after a slow start with vaccines in the county they are making progress and 2 more months could be very valuable. She said that while she looks forward to getting back into the chambers, she wants to see what another 60 days brings them, and then be done with it.

Brenda Plank was the first to suggest looking at other venues for meetings, but later turned towards approving the declaration, saying she didn’t want to put county staff at risk. She said she thinks 60 days will go by fast, and she hopes that they can better address these issues in that time.

Zajac put forth an amendment to the motion which declared there to be no state of emergency. Following a motion to call-the-question, Commissioners voted 5-4 against Zajac’s amendment. They then voted by the same margin in favor of declaring the state of emergency. Voting in favor were Lawrence, Gross, Griffith, Reader, and Plank. Voting against were Zajac, Nakagiri, Helzerman, and Drick.