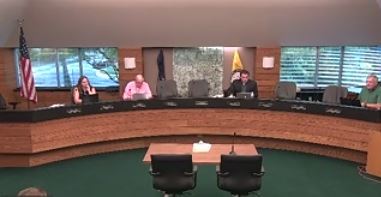 
The Livingston County Board of Commissioners General Government and Health and Human Services heard over 6 hours of public comment on a resolution that would bring $1.5-million in COVID-19 support and response funds to the county health department.

Tuesday afternoon’s meeting stretched into Wednesday morning as residents packed the County Board’s Chambers and another 190 joined in on Zoom.

Last month, the resolution to accept federal funding through the state health department failed to get the needed 5 votes to pass, largely backed by resident fear of the money coming with “strings attached.” A new resolution to accept the funds, but limit the use, was before the committee for a recommendation, Tuesday. Commissioner Mitchell Zajac drafted the new resolution which added expressly written restrictions against using funds to vaccinate minors without parental permission or institute county-wide vaccine or mask mandates. The resolution further states that the Board “does not condone the government overreach by the State of Michigan that was perpetrated over the last 18 months under the guise of public health,” and “will not condone or allow” it locally, “to the fullest extent possible.” It was discussed that the county’s legal counsel deemed the resolution varied enough from last month’s that it should be treated as “new” and not a “reconsideration.”

The in-person crowd was largely opposed to accepting the funds. While some again brought up the concern of strings being attached to the money, a multitude of parents, this time, spoke out believing that accepting the money would lead to mask and vaccine mandates for their children. Several others claimed this money would lead to being an affront to their God-given rights and freedoms. Threats of lawsuits and recalls were also made to commissioners who didn’t vote their way.

RJ Lewis of Howell asked those in favor of accepting the funds to try and see the other side. "There are some of us that want to have the choice to wear a mask or get vaccines. And there are those of us that want to have the choice not to do those things. This about this…If the shoe was on the other foot, meaning your choice to get a vaccine or to wear a mask was taken away from you. You wouldn’t want that choice to be taken away from you either."

Zoom calls leaned more in the direction of residents who felt the money should be accepted believing it is too important and needed by the health department. Some wanted it to come with “no restrictions.”

Danielle Borton, of Pinckney, asked Commissioners to have the strength to accept the funds. "the county desperately needs," adding "I am imploring you all to allow the health department to do its job in the way that best protects all of its residents. I believe they have the knowledge to make the decisions in an educated manner. As a side note, no one is forcing anybody, or their children, to be vaccinated without consent."

The four-commissioner committee approved the resolution, 3-1.

Mitchell Zajac further explained his drafting of it and said he wouldn’t support a resolution that mandates actions against freedoms, but that he also didn’t necessarily think the failed resolution did either. He said that there is nothing in there that points to a connection for mask mandates in schools or supports a round-up of children, which he said would be “abhorrent” to him. He said, “Some folks have seen this attempt to outline these restrictions as a middle ground, but to me, this is my understanding what already the perspective of the health department would have been in acceptance of the funds. But I believe it’s important to outline them expressly, again, to address the concerns of our constituents." He continued, stating that he didn’t understand where the “strings attached” came from, and from his understanding, they have a 30-day exit clause to get out of this funding.

Doug Helzerman noted that the health department is a little different, in that while they have control over the health department’s budget, the health department still has state-mandated laws and responsibilities to follow. He said a lot of their funding already comes from the state, and lot of their direction comes from the MDHHS. Helzerman said the question is whether they trust the county health department to not go over their boundaries. He talked about skepticism he had when he first became a commissioner, but that there have been many instances over the years that have led him to trust the department. Helzerman said he favors the funding because he trusts them and trusts them to do it right, but “if they go rogue and stop listening, that’s a different matter. But I haven’t seen it.”

Brenda Plank voted against the original resolution and maintained her “no” vote here, but said it’s not without listening and paying attention to everything the public has said. She said that in thinking about her last vote, observations from Labor Day weekend made her feel better about voting against the funding. In observing football games across the country, she said she saw thousands and thousands of people in the stands with no masks. "So I think to myself, why are the people who are so opposed or wanting us to accept the funds, I should say, I would expect those people to be standing outside the stadium with their mask on saying ‘What are you all here? You’re spreading the germs and you’re, you know, gonna be super-spreaders’ and spending time, you know, doing that, but I don’t think they did."

Jay Gross wanted to emphasize that Livingston County will retain complete discretion with the funding and “watch it like a hawk.” He said that if the health department takes one step out of line, “we’ll shut it down.” He added that it won’t be used to enforce mask mandates. Additionally, Gross said they believe in personal freedoms and choices, and that parents can make decisions for their children. He also disputed suggestions that he and other commissioners who were in support of the funding were bowing to pressure. He said he has not been pressured by anybody and that the decisions he makes are his own, based on what he feels is right. Gross also felt the funding would help them be better prepared, as no one knows what will happen down the road with COVID.

The second call to the public was dominated by individuals who were upset with commissioners who voted in favor; many accusing them of not listening to the will of the majority. Several felt that they will either be powerless to stop the health department or unable to stop or return the funding.

Kasey Helton of Marion Township thanked the commissioners for their integrity in voting for the funding and said she felt they did the right thing, overall. She added that she was concerned, however, about the Board of Commissioners having too much oversight.

The resolution will now go before the Finance Committee at their September 22nd meeting and then to the full board for final approval.