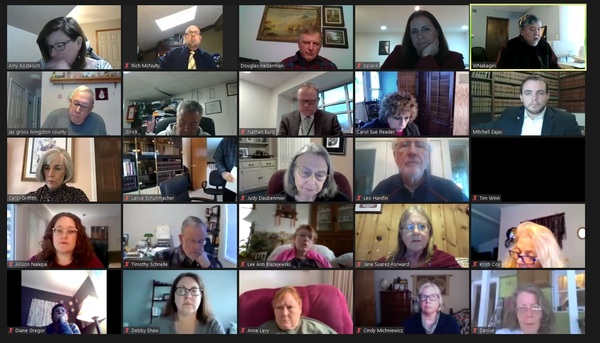 
The Livingston County Board of Commissioners unanimously approved a resolution calling on Gov. Whitmer and the state health department to replace the plan currently utilized to determine vaccine allocation.

When the full Board met Monday night to discuss the resolution that came from the General Government Committee last week, it was many of the same players and opinions again protesting and supporting the decision.

County Commissioners are actively challenging the state’s use of the CDC’s Social Vulnerability Index to determine vaccine allocations. SVI scores and ranks counties on socio-economic factors like household composition, minority status, and transportation. Age is one factor, and 6.25% of the equation. SVI rankings put Livingston County at the bottom of the ladder for vaccines coming into the county. County Commissioners argue that with senior populations being the most at-risk, a plan that takes that into greater consideration is needed. Those opposed to resolution argue that all of the factors should be considered and are inter-related. Guidance from the MDHHS states that the vaccine status in Michigan communities "correlates with the communities hardest hit by COVID-19 this spring (of 2020) and areas with high rates of risk factors for severe COVID-19 outcomes."

During public comment, several residents, many aligned with the Democratic Party, accused the all-Republican board of being racist and classist in their drawing of the resolution. Ron Kardos said Livingston County is finding out that the flip-side of wealth is now working against them. Marie Joppich said that residents should use this as an opportunity to be a role model and show the rest of the state it isn’t all about “me, me, me.”

Also speaking was Jessica Garcia of Brighton, a PhD Sociologist who works as a Diversity, Equity & Inclusion consultant for the State of Michigan. Garcia told the commissioners that if they couldn't embrace the humanity of an SVI-based approach, perhaps they could identify with the financial benefit it provided. "If you're thinking about our essential workers and who is most likely to be in our businesses working on the front lines, these are also the folks from marginalized communities and if they get infected, they can't come to work. And if too many of them get infected, the business has to shut down. And if they have long-term issues, that business has to figure out what to do with disability benefits. I ask you that you consider the impact of the decision you're making, whether its from a humanitarian side or the economic side, it is a terrible decision and as have many have mentioned, the optics are not good either."

Commissioner Brenda Plank during the discussion, and State Senator Lana Theis during public comment, said they had received numerous contacts in support of the resolution with very few opposed, which they said could suggest that those against it are a very vocal minority. Theis said she understands people’s decisions for being opposed but it is hers and the Commissioner's duty to speak and advocate for their constituents.

That was a point that would be reiterated by Commissioner Mitchell Zajac, one of the architects of the resolution, along with Board Chair Wes Nakagiri. Zajac said as it relates to age alone, older people are 90 to 630 times more likely to die from COVID. He said he recognizes that there are other factors, and that those can still be considered in a medical-based plan, but that the SVI does not weigh age enough. "I was elected, as were other members of the commission, to serve every person whether it be a young person, an old person, an affluent person, a poor person, a black person or a white person, within this county and I will do that for all citizens, young old, affluent, poor, black white, without hesitation or reservation."

However, federal health officials say the SVI strategy is being used as statistics bear out that minority populations have had higher rates of infections and deaths from COVID-19, and that their employment and housing circumstances tend to put them in situations in which the virus is more easily transmitted. For that reason, they say that distribution plans that focus solely on age do not target those who are most at risk.

Another point of view that was shared during the meeting came from David Halonen of Green Oak Township, who said much of what he was hearing from people supporting the SVI were "code words" to imply, against all evidence, that it prioritized "illegal immigrants," claiming that "tons of people are coming in, they're not getting tested" and were highly unlikely to be getting the vaccine. Halonen also disputed what he called "the so-called science" behind the recommendations to wear masks and socially distance. Halonen said he and his family do neither when they are together, and that while he and his wife both were infected with COVID-19, he said his case was "very mild" and that he chose "not to live in fear."

County Commissioner Doug Helzerman was one who took exception to the characterization of what the board was doing as racist. "If you haven't been racist, you can't stop being racist. My first boss when I moved to Lansing was a Black man. I had no problem with that. I worked in many manufacturing places in Livingston County and I have not seen systemic racism in our plants. Some of my best friends and best workers have been Black. I enjoy working with Black people. I enjoy engaging with Black people in conversation. My granddaughter married a person who had a Black mother. We have no problem with that. The question is, you say 'When are we going to stop being racist?' Well I don't think I have been racist and I don't think this is a racist thing. It is definitely not meant to be that and I think its sad if people construe wrong motives to our commission."

Nakagiri gave a presentation in which he alleged that the state is actually not following CDC recommendations, arguing that the CDC, as recently as February 19th, recommends vaccine allocation based on medical factors, not social factors as the SVI tabulates. With the SVI giving small weight to the generally more vulnerable senior population, he said the governor is following the social science, not the medical science.

Before the vote, Nakagiri added an amendment to the resolution, stating concern that the governor might not listen. His amendment instructs the County Administrator and county corporate counsel to “investigate and to report to the Board by March 1st possible administrative appeals and legal avenues to compel the state of Michigan to protect our most medically vulnerably citizens by fairly allocating vaccine doses to counties based on proportional vaccination-based population estimates and not based on non-medical or social factors.”

The amendment and the Board’s resolution calling upon the governor to replace SVI-based plan with a medical-based plan passed unanimously, 8-0. Commissioner Kate Lawrence was absent.