Commissioners Hold Off On Resolution To Defy Biden Vaccine Mandate 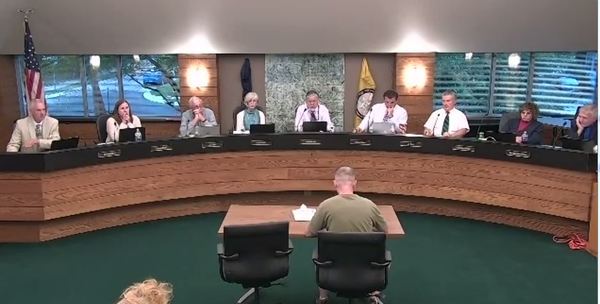 
The Livingston County Board of Commissioners is going to wait for more specifics before deciding on a proposed resolution to defy federal vaccine requirements.

Last week, President Joe Biden announced that employers with more than 100 workers must require them to be vaccinated or be tested for COVID, weekly. Failure to comply would result in a $14,000 penalty per violation, through a forthcoming rule from the Occupational Safety and Health Administration.

Commissioner Mitchell Zajac brought a resolution for consideration to the Board’s meeting, Monday, declaring that Livingston County will not comply with what he called that “unconstitutional OSHA mandate.”

The County’s legal counsel suggested that it be removed as an item for consideration on Monday’s agenda, and placed as a discussion item. It was. They felt it wise to wait and see what the actual regulations are first, and to hold for more details on what Biden is planning.

Zajac called the mandate an overreach by the federal government and said that these decisions are more appropriately made on the local level. He said during the meeting, “I fear that the Biden Administration has taken it upon themselves to again implement policy decisions, and as I have stated, I think publicly in response to this resolution, they’re doing it from a literal birds eye view as opposed to down on the ground and seeing what’s happening in local communities. Certainly the situation of Washington D.C. is different than Florida is different than California. And if those are different, so, too, are the differences between Washtenaw County and even Livingston County.”

Zajac said he understands there are concerns by some with the resolution, but he has “eyes wide open on those concerns,” feeling it is important enough to still draft and submit anyway. He called it an issue of freedom, and felt it was important to put the County’s position forward.

Zajac further clarified that the resolution is addressing the County as an employer, only, and not other businesses with 100 or more employees.

Doug Helzerman said that if the resolution is worded correctly, he would be ready to act that day, but then conceded that “maybe it’s not as well as it could be.” He pointed out that it wouldn’t be enforced until MiOSHA acts on it. Helzerman added that he didn’t think the president has the authority to make this mandate, but cautioned against what could happen if he gets those who do have the authority to agree with him.

Brenda Plank said she thinks this is Biden’s way of distracting from the events in Afghanistan. She said she doesn’t think the mandate is going anywhere, but she supports Zajac’s resolution.

Carol Sue Reader is a former judge, and agreed with legal counsel that the mandate isn’t “ripe” at this point. She said, “This isn’t in place yet. This is rhetoric right now. If it were in place, I think we have every right to say what we’re saying. But it isn’t so, yet. And until it is more defined and we know exactly what it is the president has now said we need, or going to be mandated to do, that we need to know specifically what he has mandated.” Reader reiterated that it’s not that she disagrees with the resolution, she just doesn’t think this is the right time for it.

Martin Smith agreed that this could be a distraction from Afghanistan. He, too, said he doesn’t think the mandate will move forward, but if it does, the resolution to defy accurately expresses his feelings about it.

Chairman Wes Nakagiri said he is for pushing back as hard as they can, but he agrees that it is not “ripe” yet. He asked commissioners to start thinking about how much money they might be willing to spend, moving forward, either in legal fees fighting it, or in potential fines.

Zajac disagreed that it’s not “ripe” to make this declaration. He called it an opportunity to make a strong statement to the state and to the Biden administration.

At this point, Helzerman began to ponder the trajectory of the country, asking that “if there’s going to be true change, what is going to spark it?” He asked people to look back at the country’s founding and what made founders write the Declaration of Independence. Helzerman said he hopes it doesn’t come to that, but if there is going to be substantial change, there will be something that galvanizes us. He said it could be Afghanistan, but maybe it’s this vaccine.

Jay Gross was in agreement with the wait-and-see approached requested by legal. He added that he has deep feelings of events that have taken place in this country in recent months, and that if MiOSHA and OSHA come out with a mandate, he will be there fighting it with every breath he has.

With the discussion wrapping up, Zajac made a motion to approve the resolution. There was discussion as to whether or not it had to first be put back on the agenda. However, that was never resolved as the motion failed anyways in gaining support from a second commissioner.

Two public comments periods were held during the nearly six-and-a-half hour meeting, stretching more than four-and-a-half hours, combined. Some residents were civil, but more often people were snippy with the other side, accusing each other of spreading mis-information and arguing over which side has the majority of support, spoken or unspoken.

Though not on Monday’s agenda, those in the Board’s chambers largely took up a call against a forthcoming vote for accepting $1.5-million in federal funds to be used for COVID response by the Livingston County Health Department during the first of the evening’s sessions.

Still, the mandate-defying resolution did get some attention, including from Alena Anderson of Oceola Township. She requested of the Board to, “Please vote yes on Mitch’s new resolution to not comply with President Biden’s unconstitutional mandate. The government is here to protect our freedoms, not our health. We don’t need another mandate, we don’t need the health department, we don’t need the president telling us what we can and can’t do with our body.”

Following discussion, at the second public comment period, more asked the Board to pass the resolution in defiance of the Biden administration. A couple mothers told Commissioner Helzerman that they were the revolution he was asking for.

Most support for turning down Zajac’s resolution came from the Zoom crowd, viewing online. Judy Daubenmier, Chair of the Livingston County Democratic Party, asked commissioners to defeat the resolution, noting that it is not just members of her party that feel that way. She shared vaccination numbers that have Livingston County as the 18th most vaccinated out of 83 counties, saying, “The people who are vaccinated in these townships, they’re not all Democrats, I know all too well. Brighton Township is not, 65-80% Democratic. Those are many Republicans who voted for you. They want this pandemic to end. That’s why they got vaccinated. They want to have their freedom back to go out to dinner, to shop, and so forth. They want you to end this pandemic, not prolong it.

During the second public comment period there were also calls by pro-mandate supporters to not spend any County money on legal fees fighting the federal government in a case they feel can’t be won.

The resolution may come back when more details are known.