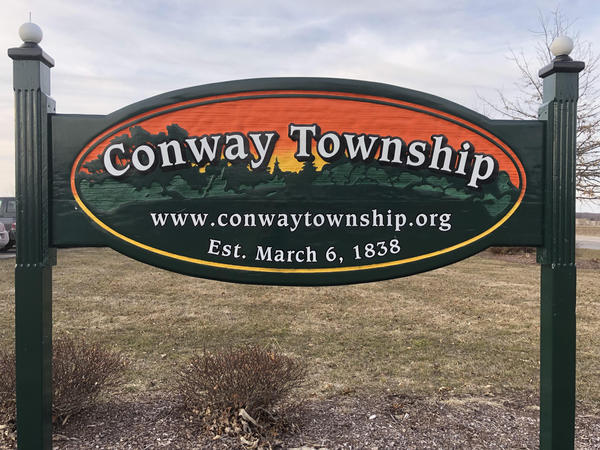 Conway Township officials have pushed their high-speed internet ballot proposal from August to November because of a changing proposed millage rate.

At Tuesday night’s regular meeting, the Conway Township Board of Trustees began, by some accounts, ready to pass ballot language for bringing fiber-optic cable to the township for residents to vote on in August. At last week’s meeting of the Internet Advisory Committee, the public was told to expect the millage to pay off the needed bond proposal for the project to be around 2.517 mils. The prepared proposal Tuesday night, however, was more than a full mil greater, at 3.5395 mils.

Township Bond Counselor Jeff Aronoff spoke that it was important to point out that voters are not voting on a millage proposal, but a bond proposal. Aronoff said this new number is made of the most conservative assumptions they could make and assumes that the bond will not be tax-exempt. He said that voters need to know what the number will be around, but also that it can change. Being upfront and having it change between this week and last is ultimately better than changing it later, so that there is a consistent estimate locked in between now and when the vote takes place. But, he says, that number is still just an estimate.

Conway officials are prepared to bond for an amount not to exceed $5.7-million. Trustee Larry Parsons said he had a “real problem” with the motion, as it was a “far cry” from what they told they told the public a week ago in terms of millage. He stated it was not their intention to mislead the public. Trustee Rick Kreeger agreed, and said it would be better placed on the November ballot where more people would vote on it. Supervisor Michael Rife said he too would be happier with a November election because these numbers weren’t the same.

The cost of the project could change as a USDA grant is in the process of being completed. Officials won’t know if they are receiving money for another 4 to 10 months, which is not enough time to affect the language for either the August or November ballot. Clerk Todd Anderson and Treasurer Debra Grubb believed because of this they should stay on the August timeline. The Board voted against this 3-2, and then voted to prepare new language for a November ballot, to be presented at a future meeting. (MK)