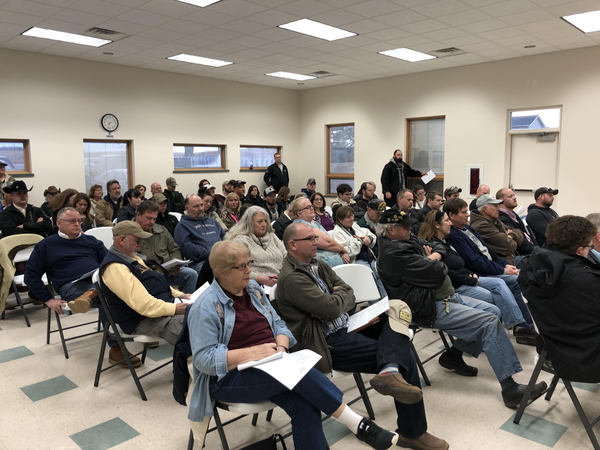 Dozens of residents showed in Conway Township for an update on what bringing fiber optic internet could cost them.

Roughly 65 people were at the Board of Trustees regular meeting, Tuesday, only to learn they would have to wait a little longer. “Numbers” was the key word being used throughout the night as township officials, engineers, and residents are still waiting to learn what it will cost to bring high speed internet to the area. Design engineer Mike Grady said they will have a better idea by the first week of April.

A few in the audience still chose to speak their opinions during public comment, with most leaning in favor of fiber optic cable as long as the price is reasonable. Some wanted assurance that when the cost comes in, it will be put to the voters to decide. Conway Township Supervisor Michael Rife confirmed this will be the case. Others were concerned on why it had taken the township so long to get to the point they are currently at. Trustee Larry Parsons said previous boards were hoping to get the internet for free through state programs dating back around 12 years, but it didn’t happen. They began pursuing this on their own in, in earnest, during December of 2016. Clerk Todd Anderson agreed that what they have now isn’t enough. He called the internet “a way of life” and stressed the importance of making improvements over what they currently offer.

When the township has a better idea of the cost for building the infrastructure they will be able to formulate and propose an internet millage for voters to decide on as part of the August ballot. Trustee Parsons said this would be fairly unique, as only 1 township in the state has passed such a millage. Engineer Grady informed the crowd that the USDA has just begun accepting federal grant applications for better internet. Between $15-thousand and $3-million could be available, but the grant is said to be highly competitive. The Board of Trustees will hold a special meeting when they have a more concrete idea of what the total cost of the project will be. (MK)