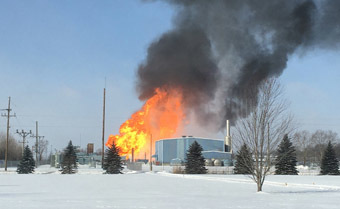 Efforts to conserve energy across Michigan following a fire at a natural gas facility apparently made a difference.

Consumers Energy has announced that its emergency public appeal to conserve natural gas is ending at midnight tonight for all customers – commercial, industrial and residential. Consumers Energy CEO Patti Poppe said there is no doubt the gas reduction efforts by residents and businesses across the Lower Peninsula played a key role in helping maintain natural gas flow in their distribution system at a time when it was critically needed. She says because of the swift action of all, they were able to continue critical services. The Ray Natural Gas Compressor Station in Macomb County, where the fire occurred, accounts for 64% of Consumers Energy’s supply. Poppe says they know it was the worst time to ask residents to turn their thermostats down, but they were really left with no choice. She called it “truly an unprecedented crisis" they have never experienced before.

An emergency alert was sent late Wednesday to cellphones asking people to lower thermostats to 65 degrees or below through Friday. Auto plants and other big energy users throughout Michigan joined residential customers in cutting back. The cause of the fire remains under investigation. The fire reduced the amount of natural gas that could be delivered to customers from underground storage located at the compressor station. The site is a combination compression and storage field where Consumers Energy stores natural gas until it is needed by customers.
The damage to compressor equipment at Consumers Energy’s largest storage and delivery system, coupled with continued historically cold temperatures, prompted the company to ask customers to dial back their thermostats and conserve natural gas use in their homes. Repairs at the Ray Compressor Station are ongoing, and one of the station’s three compressors is partially in service. A root cause analysis to try and determine why the fire occurred has also been initiated.