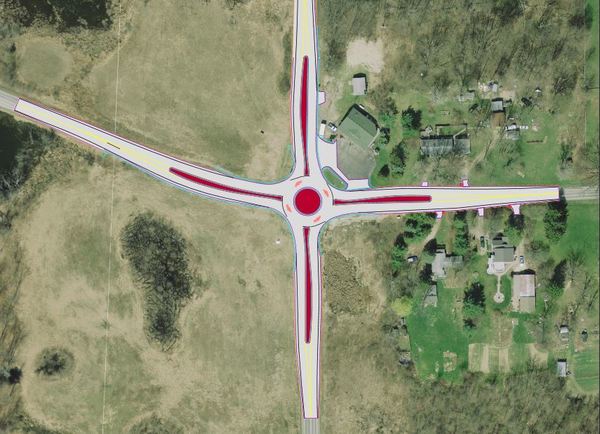 
A roundabout project is getting underway soon in the South Lyon and Salem Township area.

The Washtenaw County Road Commission held a virtual construction meeting about the Pontiac Trail and 7 Mile Road Roundabout. Project Manager Mark McCulloch told attendees they’ll be proceeding with the $880,000 project, which has been downgraded from original plans. There will be traffic impacts during construction. The intersection is expected to be closed to all traffic for approximately eight weeks, although access to the general store and residences on the northeast corner will be permitted from the east.

It was noted that a larger roundabout was originally proposed in 2013 but due to right-of-way and land acquisition efforts and other issues, McCulloch said the project had to be shelved and grant money returned. McCulloch said status quo is not desirable because South Lyon to Ann Arbor is a commuter route – creating significant back-ups in the morning heading southbound and then northbound in the evening. He said other options were explored such as a traffic signal but deemed not feasible due to capacity needs, adding it would have created big constraints on the country general store on the northeast corner of the intersection so they went toward the roundabout. What’s proposed is now a smaller, one lane roundabout with curb and gutter around the circumference of the roundabout, the splitter and center islands, and the intersection itself. A crosswalk will also be built on the east leg as requested by property owners and street lighting will be installed.

McCulloch said the footprint is not as large as traditional roundabout but it still offers safety and capacity, moves traffic efficiently and reduces congestion - adding it also reduces impacts on neighboring parcels and puts down new pavement. McCulloch added that roundabouts help to slow traffic - unlike traffic signals when people run red lights at high speeds to create T-bone crash situations. When collisions happen in roundabouts, he says they tend to be more property damage verses hospitalizations.

Utility work has already been taking place but McCulloch said the contractor, Cadillac Asphalt, requested an earlier start date than proposed in the contract of June 15th. If the schedule gets finalized, work could start as early as June 1st. McCulloch said plans were to have the project completed by mid-August but if they start earlier, then it could be done by early August. Crews are expected to be out working from 7am to 7pm Monday through Saturday and following COVID-19 safety precautions.

More information about the project and a recording of the virtual meeting can be found through the provided link.