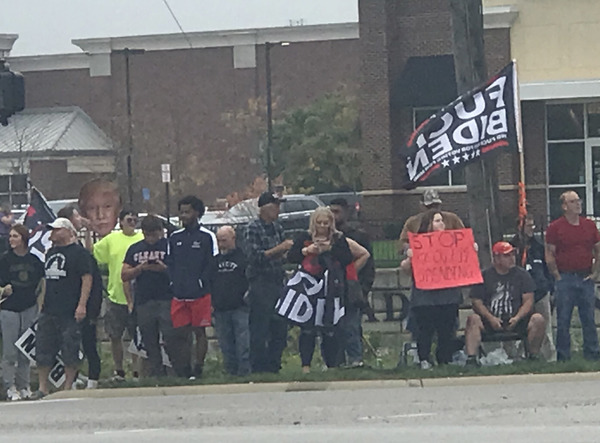 President Joe Biden spoke at the Operating Engineers Local 324 Training Facility. Prior to and during the event, hundreds of protestors gathered on all four corners of M-59 and Michigan Avenue carrying dozens of "F***Biden" flags and signs that said "China Joe Must Go!" and "Biden is a Traitor".

In an article on Mlive.com, 8th District Democrat Elissa Slotkin commented that she was “embarrassed” by the profane message and the President pointed out the signs while passing through the rally – noting they were also next to a school. That school is Howell’s Voyager Elementary. Slotkin told MLive “I pointed out the school to him and, he said ‘I guess I’m still surprised when people, even if they don’t like me, are willing to be that profane around children”. The congresswoman added “It’s just a sad moment when someone can stand blocks from a school with a sign using that kind of profanity.”

A video posted to TikTok shows the President's motorcade coming through the intersection as protestors stand the side of the roadway and are later told by police to clear the street. A young boy featured in the video is heard to ask where President Biden will be getting out of his vehicle "so I can shoot him." It's believed that the video has been reported to law enforcement authorities.

A request for comment on the nature of the rally, including the profanities and threats of violence, was sent to Reckling but has not been returned.