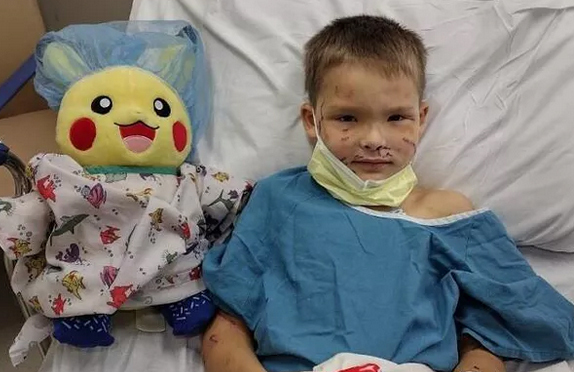 
As a White Lake Township boy continues to recover from a dog attack, an online fundraiser to assist him has more than doubled its original goal.

9-year-old Hunter Heater was "severely wounded from head to toe" in a dog mauling on October 13th, according to a GoFundMe page. As he jumped on a trampoline, two dogs that got loose from their cages attacked him, causing what were described as “massive lacerations and wounds that were [mere] inches from main arteries.”

The page says he received immediate medical attention and was rushed to a hospital," where he received over 200 stitches on his arms, legs, face and neck and over 40 staples to his skull. He also suffered multiple skull fractures behind his left ear, and swelling on his brain. While that has reportedly gone down, he is now said to be facing "overwhelming" medical expenses, including for physical therapy to help him walk again.

In addition, the White Lake Township Police Department has decided to adopt Hunter’s family this year to make sure they have a good Christmas. They are donating money to the cause and in return are allowed to grow beards throughout the New Year. The public can help by stopping in at the White Lake Township Police Department and purchasing a beard for a $5 donation, sign it, and then stick it on the wall in their lobby.