Community Officials And Leaders Weigh In On Opioid Crisis 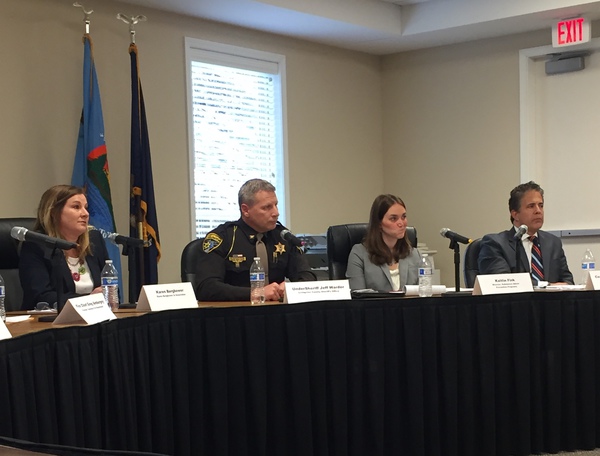 Local officials and community leaders led a round-table discussion Tuesday regarding the opioid crisis and what’s being done to combat the problem in Livingston County.

The event was held by 8th District Congressman Mike Bishop at Putnam Township Hall and attended by approximately 60 residents. The meeting featured a panel comprised of Bishop, State Representative Hank Vaupel, Undersheriff Jeff Warder, Putnam Township Fire Chief Greg Amburgey, Community Alliance Coordinator Kaitlin Fink and Karen Bergbower with the county’s Misdemeanant Drug Court program. Each panelist shared a different perspective on the impact opioid abuse and overdose is having, as well as individual and group efforts to mitigate the prevalence of the issue in the county.

Congressman Bishop brought up a bill he plans to introduce that would attack the problem on an international level by stopping the influx of drugs from foreign countries through the United States Postal Service. The USPS doesn’t have the same requirements as private mail carrier companies in regards to identifying what’s inside a package, where it’s coming from and where it’s headed. Bishop says there is a need to increase efforts to give the USPS the ability to do that.

Representative Vaupel also shared a perspective that looked at the opioid crisis from its early beginnings, noting that Medicaid reimbursements were judged on outcomes and outcomes were judged on patient satisfaction. Vaupel says one of the vital signs was pain control, "so it was to nobody in the medical profession’s advantage to try to really control the prescribing of the opioids."

Fink and Bergbower touched on a number of preventative and treatment measures that are underway or available in the area. Still, Bergbower says a piece of the puzzle also includes educating patients and health professionals that “just because it’s prescribed, doesn’t mean it’s safe.”

However Claire Donovan of Pinckney feels government officials are late to the party. She spoke to the drug problem she says Pinckney experienced for over 14 years, saying the community rose to the challenge and pulled together to address it. Donovan told the panel she feels officials have “been slow” to be a part of that team. Donovan says Pinckney received snide remarks and was “community-shamed”. She feels the opioid problem is now getting recognition because it has grown to larger areas. Donovan says "officials need to be listening closer and communicating more."

After the panel discussion, there were a few questions taken from the audience. One resident claimed Bishop accepts campaign donations from opioid manufacturers and asked if he would cease to do so. Bishop responded to say, “The very idea that somehow campaign contributions impact the way I vote or the way I represent my community is quite frankly ridiculous and I want you all to know I’m here today to talk about solutions, not to talk about politics.” Speaking in regards to the other panelists, Bishop said, "This has nothing to do with them and I know that there’s an election coming up. I do this because I care...I’ve never had anybody question my integrity and I’m not going to start today." (DK)