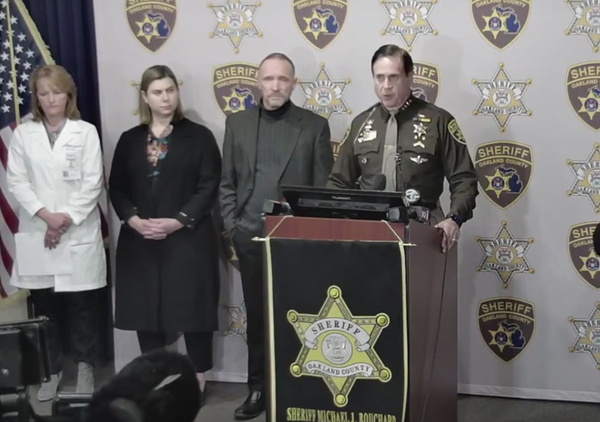 
A 15-year-old sophomore opened fire at his northern Oakland County high school, killing three students, including a 16-year-old boy who died in a deputy’s patrol car on the way to a hospital.

Eight other people were wounded, some critically, including a 14-year-old girl who was placed on a ventilator after surgery. Investigators were still trying to determine a motive for the shooting Tuesday at Oxford High School, Oakland County Sheriff Michael Bouchard said.

“The person that’s got the most insight and the motive is not talking,” he said at a news conference late Tuesday.

Deputies rushed to the school around lunchtime as more than 100 calls flooded 911 dispatchers with reports of a shooter. They arrested the student in a hallway within minutes of their arrival. He put his hands in the air as deputies approached, Bouchard said.

The three students who were killed were 16-year-old Tate Myre, 14-year-old Hana St. Juliana, and 17-year-old Madisyn Baldwin. Bouchard said Myre died in a patrol car as a deputy tried to get him to an emergency room.

A teacher who received a graze wound to the shoulder has left the hospital, but seven students ranging in age from 14 to 17 remained hospitalized through the night with gunshot wounds, he said.

The gun the boy was carrying had seven more rounds of ammo in it when he surrendered, Bouchard said.

Undersheriff Mike McCabe said the student’s parents advised their son not to talk to investigators. Police must seek permission from a juvenile’s parents or guardian to speak with them, he added.

In recent weeks, a severed deer head was found on school grounds, prompting school officials to issue a statement seeking to calm “numerous rumors that have been circulating throughout our building.” Undersheriff Mike McCabe said that the deer incident was unrelated to the shooting. Sheriff Bouchard said he was aware of rumors in the days before the shooting, but said none of those reports had reached his department.

Also speaking at the late Tuesday press conference was Congresswoman Elissa Slotkin. The 8th District Democrat flew home from Washington D.C. after hearing about the shooting. She credited the Oakland County Sheriff's Office and the Oxford district with the training and preparation for such an event that she said surely resulted in lives being saved. But, she added, more needs to be done.

"People have asked what can they do? Just reach out to anyone you know in the Oxford area and the Lake Orion area (and) just show that basic human compassion by just reaching out," said Slotkin. "People need to hear from others right now and we know that whatever the circumstances end up being with this young man that this just highlights the deep need we have for mental health services we have in our schools and across the country."

A pair of candlelight vigils were held Tuesday night at churches in the Oxford area, with approximately 300 people attending one at Kensington Church in Lake Orion while another 200 gathered at LakePoint Community Church in Oxford Township.

Oakland County Prosecutor Karen McDonald said in a statement her office expects to issue charges quickly and that an update would be given Wednesday.

Education Week, which tracks such shootings, reports the Oxford incident was the deadliest on school property this year, among 28 in 2021.