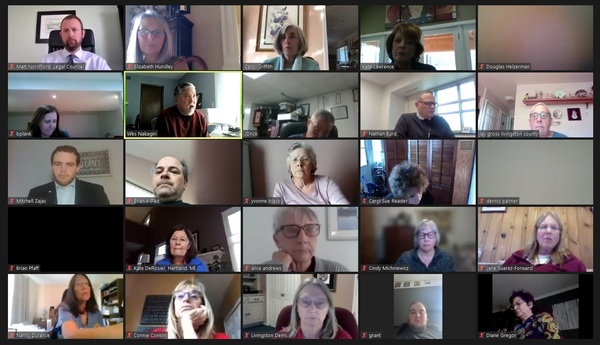 
The Livingston County Board of Commissioners has reversed their decision to declare a local state of emergency and has offered a solution for meetings going forward they hope will please everyone.

Last week, the Board authorized the resolution which would allow the 20 lower bodies of government to fall under their umbrella and continue holding virtual meetings by a 5-4 vote. That declaration was never signed. Without a declared state of emergency after Wednesday, a government body must meet in person to do business.

A special was meeting was called, Monday, to reconsider it by Commissioners Brenda Plank, Mitchell Zajac, and Jay Drick.

During the first public comment period, opinions falling both in favor of reconsideration and against reconsideration were strongly expressed. Those in favor of reconsidering and not declaring a state of emergency spoke of government overreach in their lives and COVID numbers being falsely inflated. Residents Jessica Hamlin and Rich Knieper accused commissioners in favor of the declaration of not wanting to do their jobs in person and being afraid to come in. Pastor Bill Bolin of Brighton said there are people that can take their place with "sanity" and that will listen to the will of the people.

Those against reconsideration, and in favor of keeping the declaration, came out in stronger force than last week. They spoke to a rising number of positive cases in recent days and people being forced to meet in-person being put at risk. Resident Lynn Vogel said there was "cognitive dissonance" between Commissioners demanding more vaccines to protect the vulnerable population, but then not letting them meet online. Livingston County Democratic Party Chair Judy Daubenmier said a reversal would leave local governments in the lurch and prove them to be an unreliable partner.

Commissioner Plank, for all intents and purposes, was the swing vote last week, changing her mind to support the declaration during discussion. She said after talking the following day with County Administrator Nathan Burd and IT Director Kris Tobbe, she felt more confident in the ability to run hybrid meetings and asked for the special meeting so she could change her vote.

Commissioner Carol Griffith expressed concern about saying they voted one way and then rescinding it to vote another and the precedence that could set. Last week, she said, they gave government entities under them umbrella protection, and now they are telling them that plans are different. She was joined in that concern by Commissioner Jay Gross, who also felt they were putting a burden on local jurisdictions with little time to react.

Despite surging case counts, including a nearly four-fold increase in the rate of COVID infection since mid-February, Zajac continued his argument that there is no data suggesting there is a state of emergency and said he preferred to let the local municipalities make that decision for themselves. Several in the county already have, with some wishing to continue meeting virtually and some not. Earlier Monday, the City of Howell announced they were moving forward with their own State of Emergency declaration after "uncertainty" created by the Board of Commissioners. The Village of Fowlerville also voted on Monday to do the same.

Chairman Wes Nakagiri revealed a plan to introduce a resolution that changes the Board’s rules and calls for all county meetings to be hybrid- allowing citizen participation in person, if space allows, or online. He said that could end up being “the best of both worlds” and he thinks it could accommodate both people who want the order rescinded and people who want to be able to participate virtually.

The Board then voted 6-3 in favor of reconsidering last week’s declaration. Commissioners Plank, Zajac, Helzerman, Reader, Nakagiri, and Jay Drick voted in favor. Voting in opposition were Griffith, Gross, and Kate Lawrence.

With the declaration back on the table, Lawrence proposed an amendment to change the end date from May 31st to April 16th. She felt this would give entities that had counted on last week’s decision time to prepare for its impending reversal. That motion failed 5-4.

With the idea of hybrid meetings being on the table for all county meetings in the future, commissioners then voted unanimously against a declaration of a state of emergency.

Emergency Manager Therese Cremonte then spoke, saying she has done her best to reach out to all the county’s governing bodies. She said the emergency declaration is a key to doing business and can be picked up any time the need arises through the end of the year.

The hybrid option being on the table seemed to satisfy both sides during the second public comment period, which was, save for a couple of exceptions, more civil than the first.

Some concerns were expressed, namely by Kate DeRosier, who is on the Hartland Cromaine Library Board. She said they are in a bind now, with Hartland Township electing to not declare a state of emergency, forcing them to meet in person.

Resident Jessica Garcia thanked the commissioners who stood by their original vote and said the evening’s events were a “clear example of the government’s inefficiency.” She said she hoped the Board followed through with their intentions of hybrid meetings. Lynn Vogel was also glad they were being written in.

Cindi Holland thanked commissioners for reconsidering ending the state of emergency at the county level and for taking an action that will “satisfy all.” She said this was a step in the right direction of bringing back normalcy.

The resolution for hybrid meetings will be ready for introduction at the General Government Committee’s April 5th meeting. Zajac, who is the committee chair, said he will put a Zoom link in for the public who wish to participate. Passing through there, it will then come to the full Board for consideration and possible approval.