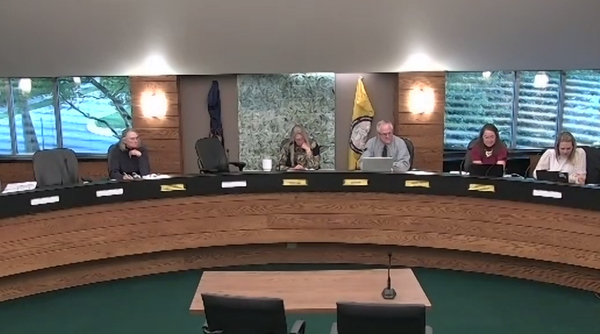 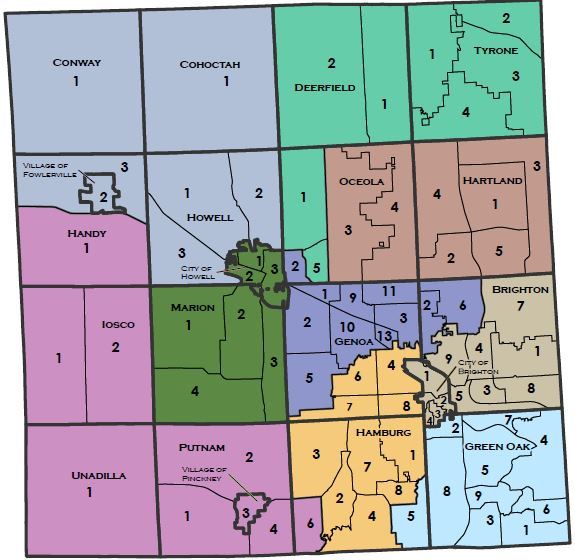 
New districts have been drawn for the Livingston County Board of Commissioners and some will result in incumbent commissioners facing off in future elections.

Both commissioners and registered voters were able to draw proposed maps. The Commission adopted a map on Wednesday to ensure compliance with the October 11th deadline. It had sought an extension like many other counties across the state but had not yet heard back from the Michigan Court of Appeals and thus felt it would be appropriate to just proceed.

All put forward proposed maps utilizing an online tool and registered voters were also able to submit maps. The Commission received 14 maps for consideration and ultimately adopted the map proposed by Clerk Betsy Hundley in a 4-1 vote at Wednesday’s meeting, doing so without discussion. Hundley said she found the process very interesting and appreciated the public comments and that they did have public maps submitted. She said her approach was to follow the law and do this to the best of her ability, adding there is no perfect map but she felt remaining contiguous is important. She told WHMI with Redistricting, the courts have recognized there is no “perfect” map. She said the map selected had a lower deviation and had the most consensus from members of the apportionment commission during the discussion of maps.

Democratic Party Chair Judy Daubenmier was opposed to Hundley’s map, saying it splits up five of the county’s 16 townships and had a compactness score of 90 out of 100 according to davesredistricting.org, which all commission members used to draw their maps. Daubenmier stated the new lines pit Commissioners Jay Drick of Howell and Mitchell Zajac of Howell against one another and that Commissioners Brenda Plank and Jay Gross, both of Green Oak Township, will now be in the same district. She added that while is not opposed per se to incumbents in the same district, she felt the public needed to be aware of what the map would create.

Daubenmier’s motion to adopt a map submitted by Anna Santa Maria, a member of the public and a professional cartographer, did not receive a second even though it split up only four townships and had no triple-breaks with a compactness score of 100 out of 100. One criteria was that the maps do not create any partisan advantage but Daubenmier maintains that the adopted map is clearly more favorable to Republicans than the others submitted. Daubenmier noted that the approved map splits Hamburg Township into three separate districts and further pits sitting commissioners against each other in two districts. A map submitted by Daubenmier would have kept Hamburg whole – which she said would have let the largest municipality in the county elect its own representative, although it had a lower compactness score of just 82.

Daubenmier, in a press release which is posted below, felt that triple-breaks of a district or breaking up a city are bad public policy. “The decision to adopt a map that splits up Oceola and Genoa Townships into three separate districts is grossly unfair to voters. It will lead to confusion about who their county commissioner is, making it more difficult for them to have a voice in county government and creating frustration and cynicism. The multiple splits also will make it harder for township clerks to administer elections, requiring multiple different ballots. It was totally unnecessary because better maps were available,” Daubenmier said.

She further said that the lack of a decision by the Court of Appeals on the extension request appeared to catch Reckling off guard. “She said she was not yet prepared to vote on maps, asked to delay the process, and stumbled to come up with a map to put forward before finally saying she liked her own — which would have pitted Commissioner Wes Nakagiri against Commissioner Martin Smith, in addition to the other two pairings,” adding that she was “shocked” Reckling was unprepared and ended up just voting for the map drawn by Hundley, who is Reckling’s mother. The full press release from Daubenmier is posted below.

It was noted during the meeting that the commission has discretion when it comes to the topics of avoiding maps that pit commissioners against each other as long as it’s not purely for political advantage and communities of interest as they are not required criteria but could be factored in.

Reckling commented during the meeting that while there are two cities, there are also a lot of rural areas and she often hears from people who live on the outskirts who feel very left out compared to the city and thinks it’s important to give good representation to those areas of the county.

Nash said she felt the main intent of a good map gets lowest possible deviation and agreed the splitting of boundaries is important to take into consideration, along with compactness and having districts as square as possible but added it’s difficult and there’s not a perfect map.

Reader also commented it was an interesting process and thanked the commission and public for participation. He said it’s not a beauty contest when it comes to drawing maps, noting some are elegant because of “compactfullness,” some are elegant because of deviation and some more by the number of splits. Reader added it’s impossible to not to do some splits because of all the concentrations, they just have to do the best they can in each individual area and meet various criteria.

Per a legal opinion, the maps will be resubmitted to the state on October 18th to ensure compliance. The selected map will serve as the County Commission map for the next ten years.

A link to more information about the commission and the new maps is provided.