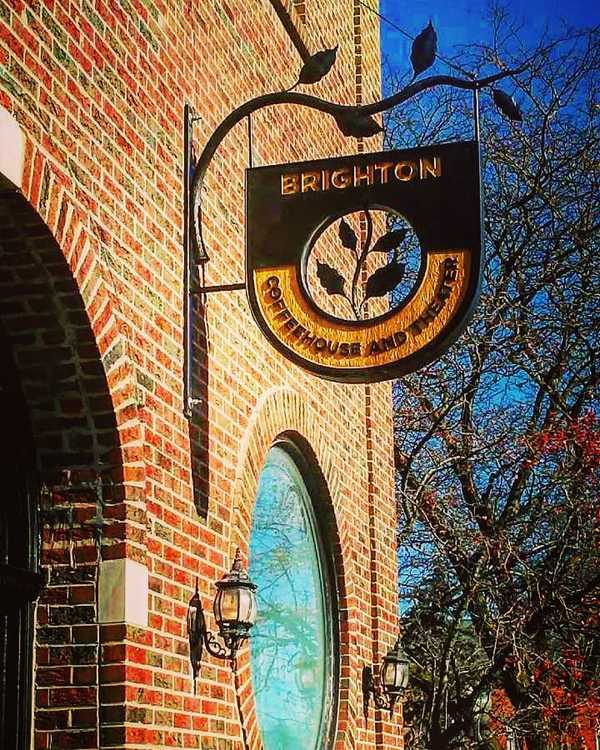 A new coffeehouse has opened in Brighton, which isn’t so unusual. What is unusual is that it’s both a coffeehouse and a live The Brighton theater. It’s been a lifelong dream for Markus Goller. As a 25-year resident of Brighton, he, and his wife Amy, had long dreamed of opening a coffeehouse in the community. And, as an entrepreneur, Gollar has opened around 50 coffeehouses in several states around the country. But he says the grand opening one in Brighton has definitely been the biggest.

The Brighton Coffeehouse and Theater, as it has been named, is located right next to the Mill Pond, in a building that formerly housed Beverly Rae’s clothing store and – for those with long memories - the Little Professor Book Store. The Gollers had extensive renovations done to the interior of the building, although the brick exterior remains pretty much the same. The result of a chic, upscale-looking coffeehouse with a movable stage and a baby grand piano and, in another section, a complete variety of coffee brews and food fare. That ranges from the usual assortment of cappuccinos, lattes, and espressos to unusual and unexpected caffeinated drinks.

The Gollers also have fresh, made-to-order sandwiches – which, whimsically, have the names of Shakespearean characters. They also have soups and salads. In fact, they open early enough on weekdays – 6:30 a.m. – that commuters in the bedroom community of Brighton can pick up their favorite brew and their lunch to go before they take off for Detroit, Lansing, Ann Arbor, or other locations. And the Gollers also plan to put on plays – using both professional and amateur actors - perhaps even a production as ambitious as My Fair Lady and possibly in the new Mill Pond Amphitheater, which is just a short walk from the coffeehouse.

Also, Goller’s wife, Amy, plans to put on summer camps for area children with aspirations of becoming an actor. Markus Goller is not done with the renovation of the coffeehouse and theater building, saying he plans to have the rear of the structure – which fronts the Mill Pond – landscaped this spring with trees and shrubbery installed. The former tenant of the building, Beverly Rae’s women’s apparel store, has moved and is now located kitty-corner across the street, at 203 W. Main. (TT)