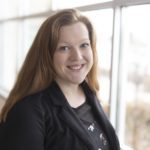 Provost Emily Barnes has been appointed Interim President effective May 8th - once current President Dr. Jayson Boyers resigns to become president of Rosemont College. Barnes is the University’s first female provost and will become its first female interim president. She completed her doctorate in Higher Education Leadership this year and was an academic entrepreneur for six years before joining Cleary’s leadership team, building learning management systems and custom, multi-format educational and training experiences for a variety of organizations. Barnes is known as the academic thought leader behind “The Cleary MindÔ”- Cleary’s new, unparalleled Business Arts educational approach.
Barnes says she’s grateful for the privilege to serve as both the first female Provost and first female Interim President, especially during this pivotal year as they celebrate the 100-year anniversary of women earning the right to vote. Barnes says as they look to the future, she’s committed to continuing the momentum of change with their institutional leaders and partners to meet the needs of our growing academic community.

A presidential search committee is said to be taking shape and will be led by David Barfield, a current Cleary trustee. Cleary University Board of Trustees Chair Glynis McBain says the first matter of business will be to select an executive search firm to cast a nationwide net for quality candidates to shepherd Cleary into its next stage of growth. Under Boyers’ presidency, which began in October of 2015, Cleary is said to have grown exponentially and transformed its physical campus. McBain says they’re confident the value of a Cleary education will continue to grow and they’re committed to ensuring that the next president will carry that goal forward. (JM)