A Candid Conversation On Race Coming To Livingston County 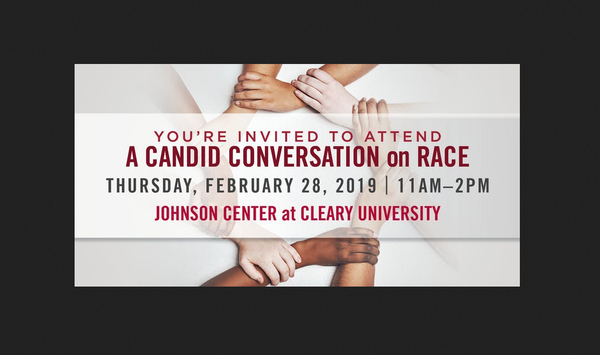 Cleary University and the Livingston Diversity Council are inviting people from all backgrounds to come out to a special event about advancing the conversation of race in America.

A Candid Conversation on Race will be taking place next Thursday, February 28th at the Johnson Center at Cleary University. The university and the Livingston Diversity Council partnered for a successful Martin Luther King Jr Day event last year, and are now teaming up again to this time honor Black History Month.

President and CEO of Cleary University, Dr. Jason Boyers, said this isn’t meant to be a politically charged event. He said, “It’s not progressive conservative, it’s not politics. What this is about is creating a community where people are able to live together, thrive together, take advantage of different perspectives, different life experiences. People make this a political issue. It’s not. It is, at its heart, an economic issue in creating a community everybody feels comfortable building families around…”

Two special guests will lead and interactive panel and bring two different perspectives that will contribute to the conversation. One speaker will be Rochelle Riley, who is an author, Free Press columnist, and co-founder of the Letters to Black Girls project. Bringing another perspective will be retired U.S. Army Lt. Colonel Andrew Raczkowski. Raczkowski is a former state representative, an entrepreneur, and the recipient of the Bronze Star Medal for his service during combat operations. Along with a film clip, lunch, and question and answer period, DMJStudio is hosting a Posters on Politics exhibit. 24 posters will be displayed that touch on some of the today’s most pressing political subjects. Boyers says they’re sure to create a reaction, but that’s what they want as it will help open up and drive conversations.

Livingston Diversity Council President Nicole Matthews-Creech said she is excited for this event because it “creates an opportunity on how to learn and build skills on how to have this conversation when you don’t know what to say. So many times we’re caught in these moments where we think ‘I should say the right thing. I should step up and make this person, or help this person understand where I or this other person are coming from. But I don’t know how to say it, so we don’t say it.’”

The event runs from 11am until 2pm on the 28th, and is free to the public. Registration is open and appreciated, but not necessary. More information can be found on Cleary’s website, www.cleary.edu. (MK)